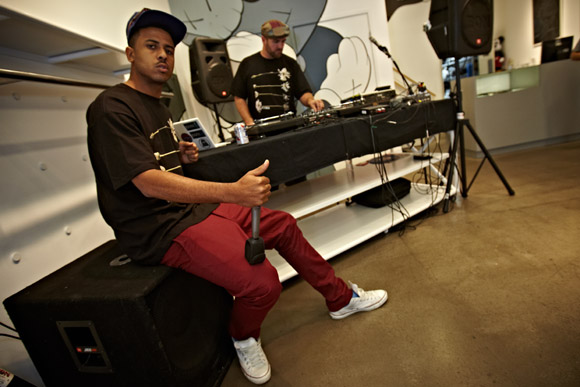 Then he was back dropping Doin’ Something, a posse cut which saw Blu, Pac Div, U-N-I, J*DaVeY, TiRon and Aymomari all on one song.

Later in the year he was back, not with “NoYork!,” but under an adopted an alter-ego B for his latest interim project “Jesus.” That release – which is in stores now, and can be bought via Amazon andiTunes and features memorable collaborations with the likes of Alchemist, Madlib, Planet Asia, and Hezekiah – spawned the Madlib produced title track Jesus and the accompanying music video released in early 2012.

Within weeks of that LP Blu was back with another new release under Nature Sounds, entitled“Open” that saw Blu showcase his beats more than his mic skills as he produced every track including the single Avenge Of The Cheap alongside frequent collaborator Sene and the acclaimed Steel Remains (Raw)

The Tees seen in the video are part of the limited edition of 500 box set or can be purchased individually via Stussy.