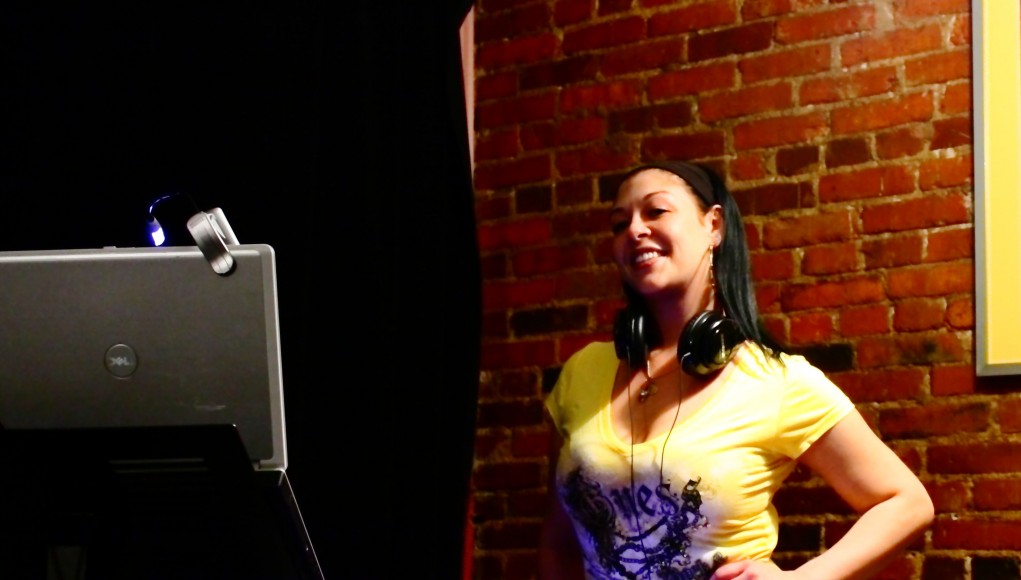 DubCNN sat down in October 2014 with DJ BEANZ – the official DJ of Bishop Lamont and Noreagas‘ Militainment imprint – for this exclusive interview.

In the feature DJ BEANZ discussed her career so far, how she got working with Bishop Lamont as well as giving aspiring artists some key advice on the best route to success.

DubCNN: We’re checking in with one of the hottest DJs in the game today! THE BOSTON BAKED BITCH is in the house! What’s good DJ Beanz?

Thank you! You know me, steady grinding. Everyday is a blessing!

DubCNN: No doubt. Hailing from Boston, how did you get your start in this rap game?

Ive always had a serious passion for music. When I was real young I used to record my own “radio shows” on my little boombox and make generic ass beats on my casio keyboard but it all started when I was 19, living in Florida as a promoter and I used to mess around on the turntables at meetings and one night they just threw me out on a set and no one was dancing at the time I hit the decks, nervous as all hell. I looked up 20 minutes into my set and everyone was on their feet dancing. That’s a high no drug could ever provide. That’s when I knew I had found my calling. But the majority of my career bloomed in the DC/MD/VA area where they actually named me “DJ Beanz” – because I’m from Beantown.

DubCNN: You are the Program Director for SwurvRadio.com, as well as an official Fleet DJ and Core DJ. How did these unions come about?

When I was DJing for an artist (Whitefolkz) out of D.C., he was working with some DJs from the Fleet and mentioned that I should try to get into a coalition. It had never crossed my mind until then. I reached out to Klassik (CEO of The Fleet DJs) and it’s history from there. I recently got into the Core Family through some incredible referrals from the Supa Funk Regulator, Celo, Mr. Mecc & DJ Ykcor. They linked me with Tony Neal & it went from there. As far as SwurvRadio goes, its an absolute honor and blessing to DJ and be the PD for one of the most well known 24 hour Hip Hop platforms worldwide. I started as a DJ and a little less than a year in, the owner, Osiris May, started buggin over my selection of tracks in my shows and asked if I’d like to be in charge of the PM rotation, making me PM Program Director. Eventually he promoted me to Executive PD and years later we’re still going strong with the hottest 24 hour rotation in the game!

DubCNN: How did the relationship between you and N.O.R.E.’s Militainment come about as GLACIERZ official tour DJ?

I can thank the Fleet for that! We had a conference call with Glacierz and knowing how influential she had been in the past as a writer with NeYo’s squad, then hearing her spit, I reached out to her. She had me do a little audition and she called me Thanksgiving Day to congratulate me on being her official DJ. I was up against some VERY respectable female DJs so I’m honored to have been even considered with such an elite selection.

DubCNN: You are also the official DJ for West Coast heavy hitter BISHOP LAMONT…and have a brand new project out in collaboration with Bishop Lamont. Can you tell us about this project? & how the union between you and Bishop Lamont came to fruition?

A couple years back I decided to put a featured artist/host for the first time on my “Reigning Real” mixtape series. I knew Bishop was coming out with a bunch of new music plus Im a huge fan of his passed work so I reached out to him. He turned out to be the most intelligent and humble artist I ever spoke with, making me want to push even harder for him. Not to mention him and I are two of the most ignorant Muf**kas I know which led me to the concept, “Ignorance and Real Hip Hop”. We put Reigning Real Vol 8 The Ignorance and Real Hip Hop Edition, together and it got an amazing response and still gets love. After that Bishop asked if I’d like to handle the East Coast side of his touring also presenting me with the opportunity to host/mix the mixtape version of his last street album, “The (P) Reformation”, to gear up for his debut album “The Reformation – G.D.N.I.A.F.T” (God Damn N*gga Its About F**king Time). This is such a dope project to have been a part of, with features like Dave NY, Torae, Apathy, Rapsody and Mike Anthony, just to name a few. We dropped “The (P)Reformation” in December 2013. The finished product along with its feedback was incredible and is still in heavy circulation worldwide. Post release of this project, Bishop then asked me if I’d like to be his tour DJ. Of course I accepted! Bishop still does shows and will continue to do shows with some amazing DJs that have been holding him down since day one because he recognizes that (which is another reason I’m proud to be a part of his team and the whole movement). So you may not see me at EVERY show on the decks but I’m in there for the long haul. We vibe so well on the artist/DJ level for many reasons but especially because we both have a genuine passion for true Hip Hop Culture, its elements and keeping it all the way thorough at all times. We do it for the love of music!!

DubCNN: What is it like to be in this game, as a female in a position of power?

In all actuality, any DJ, Program Director, blogger (most media outlets really), holds a “Position Of Power” if they know how to utilize their skills and resources. I became a DJ with the intentions of getting great music in people’s ears where it belongs. Essentially being a “Record Breaker”. I always say “Any DJ can play a record when its already hot, but can you MAKE it hot?” Thats why I find satisfaction in doing mixtapes and mixshows.

They give me that creative freedom to play what I believe is amazing music and needs to be heard, in addition to actually mixing, keeping the craft alive one mix at a time! Being a Program Director is an absolute privilege. Its taken my career and goals to a whole other level. I take pride in the quality music I put in rotation and love being able to place tracks that most stations won’t. I try not to factor my gender into the equation because to me, music is life and thats all that matters. Being a female in the game has many disadvantages contrary to what many believe. If I had a dollar for every artist that hit me with “Ayo ma, sexy, boo, how can I get you my music?”. They don’t call me “The Boston Baked Bitch” for nothing! I hit em back with “Would you go to a job interview and refer to the interviewer as ‘Ma’, ‘Boo’ or ‘Bro’? Feel free to call me Beanz.” Most don’t look passed the physical and actually LISTEN, which can be frustrating at times but it just makes me push harder to master my craft and continue to better myself as well as my skills to gain respect and fans genuinely.

DubCNN: You were also recently named the #1 Female DJ in the world? How has this distinction affected your career?

I thank you for that but it’s news to me if its true! LOL I do know that I have been ranked (in numerous lists) in the Top 100 Mixtape DJs In The World, top 50, consecutively since 2009 and was ranked as the the top female mixtape DJ in the world for a few years. Right now I’m up for “Female DJ Of The Year”, “Personality Of The Year” & “Program/Music Director Of The Year” at the Southern Entertainment Awards, which is an absolute honor!

In all honesty, when it comes to artists Im actually CHECKING for, still rockin with my West Coast favorites that are consistently putting out new heat, Bishop Lamont, Crooked I, Ras Kass, DJ Quik. As far as up and comers, Mr. Miranda from AZ, RoQy TyRaid and West Haven Blast are ones to look out for.

DubCNN: Who are your top 5 MCz of all time?

Aw man, I just got into this with Wais P and Termanology recently! It’s really hard for me to place the label of ALL TIME because I have many favorites in the underground that so many have yet to truly recognize in the present. Plus, what about GROUPS, can I count them as one? Like WuTang…Mobb Deep? So here’s my top (for now) in no particular order, Big L, Jadakiss, Biggie, Nas, Big Pun.

DubCNN: What advice do you have for aspiring artists in this rap game?

I have LOTS of advice but my biggest piece is, BUILD RELATIONSHIPS WITH DJS!!! But please recognize the difference between SPAM and PROMO! Do not bombard DJs with links to your music, introduce yourself and ask for the proper way to submit your music. Understand DJs have bills to pay too, if we just sat around listening to links all day, we’d starve to death. Most importantly though, never EVER give up, learn how to take constructive criticism and apply it, aiming to consistently better yourself and your craft. “Failure isn’t falling down, it’s refusing to get back up!”

DubCNN: Much love from DUBCNN, DJ BEANZ! Where can people purchase your music and where can the fans reach you on social media?

Much love right back to DUBCNN! Thank you so much for letting me ramble on! All of my mixtapes can be downloaded for free from my website DJBeanz.com, physical copies are available as well, just Holla at BeanZ on Twitter.

I want to thank all of my fans, supporters and haters, I wouldn’t be who I am without y’all! Don’t sleep on a female DJ, my mixtapes are crazy I PROMISE!!!! Shout out to DUBCNN, SwurvRadio, all my Core DJs, my Fleet DJ Fam and all of my WARDOGGZ (We Are Ready To Die In Order To Glory God To Zion).