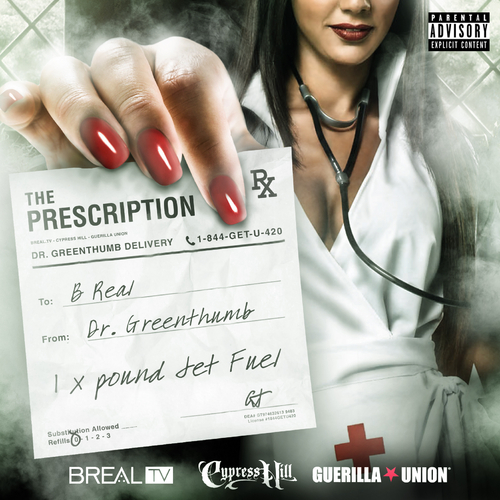 B-Real of Cypress Hill has had a good week so far – not only is he releasing his new album for free via DubCNN.com but he won the Santa Ana lottery to open a fully licensed and legal dispensary and took home two awards from the High Times Cannabis Cup!

In 1998, B Real of Cypress Hill introduced the magical mystical Doctor Greenthumb. The legendary rapper’s maniacle alter ego has become an icon within the marijuana & hip-hop communities. Doctor Greenthumb made history last week when he won the right to open a licensed collective in the City of Santa Ana at a highly coveted lottery held at City Hall in Orange County. The Doctor is also celebrating after winning awards at this year’s High Times Cannabis Cup in the Best Sativa category with the potent Tangie strain and Best Booth category amongst 400 of the top cannabis companies at the Cup.

In appreciation of this, the Doctor has brought his new album “The Prescription” for free stream or download via DubCNN.com B-Real states:

“I wanted to thank all of the Dr. Greenthumb fans by giving them #ThePrescription. I appreciate all the love and support from everyone at the Cannabis Cup and the entire Dr. Greenthumb team. We are working hard to open our collective in Santa Ana soon. In the meantime, enjoy the album!”