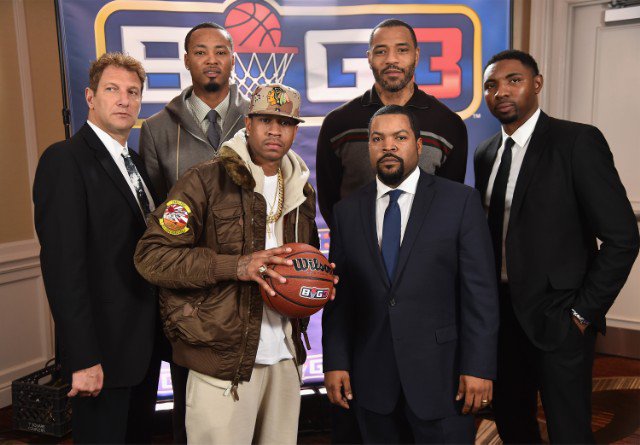 West Coast hip-hop legend Ice Cube has announced the creation of the BIG3 league, a basketball league various NBA legends, and ballers who still have loads of talent to be showcased. The league is structured as a 3-on-3, half-court game and will officially start their season on June 24, 2017. Initially, there will be eight teams in the league and each team will consist of five players. The most notable names to start things rolling are Allen Iverson, Kenyon Martin, Chauncey Billups, and Rashard Lewis. These three are already designated player-coaches and will help to fill-out the rosters for the teams in the league.

“It sucks to see your favorite players retire. It’s a great business opportunity, but as a fan, I’m just excited to see the guys that I know can play at a competitive level, and I’m happy that I have the right type of partners to be able to set the stage for that. We grew up watching these guys. We’ve seen their ups and downs, we’ve seen them win games and they become part of our everyday life in some ways. And then we look up, and they’re gone. It’s like losing a family friend or a loved one. Ice Cube, I’ve got my heroes, too, and a lot of them play professional basketball.” – Ice Cube

The games will be played on Saturdays throughout the summer and all four games will take place in the same city on that day. The city where the games are held will be changed weekly and the league anticipates visiting cities that no longer have a professional basketball team, such as Seattle, Wa. But they will also be stopping in big cities like New York, which has a huge desire for summertime basketball. There will be no official game clock, instead the game’s winner will be the first team to reach 60 points and have at least a 4-point lead. There will be 4-pointer circles beyond the traditional three-pointer line.

The league will have no team owners and the revenue generated will be divided in a structured manner among the eight teams. The team to finish number one in the standings will receive 30% of the revenue, and that will be split between the players and the coach. Percentages will decrease for teams finishing in the number two through number eight spots. The last ranked team will receive only 2.5% of the league’s revenue. This will no doubt induce a very competitive emvironment.

“I think a real milestone in the idea was when we thought of having no owners, and that the players would get in the revenue sharing. I think that was a moment when we thought, ‘Yo, this is not only a cool concept, but players can make a lot of money — especially if we built this pot how we know it can grow.”

“When I got the call, it was a no-brainer. It’s Ice Cube. It’s O’Shea. You don’t turn that down. That’s success looking right into your eyes. I just wanted to be a part of it, and I hope me being a part of it makes it a success, like everything that he’s been doing in his life.” – Allen Iverson