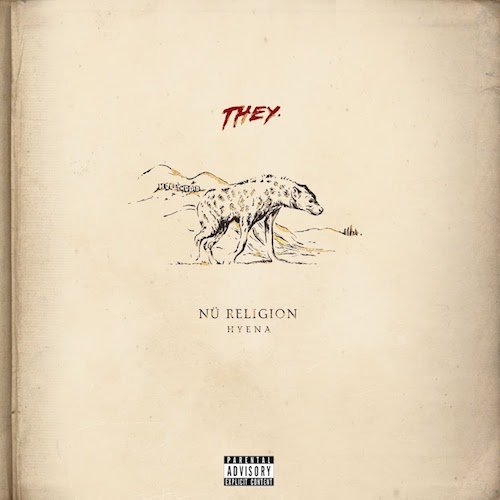 NÜ RELIGION: HYENA BY THEY. OUT TODAY FOLLOWING CELEBRATORY “THEY. WEEK” OF PREMIERES

Dante Jones and Drew Love of THEY. release their debut album Nü Religion: Hyena today.  Two years in the making, the 14-track EP is a brilliant display of their “grunge-n-b” sound and a mix of their eclectic ear, various influences, and lessons learned from working with behind-the-scenes with some of music’s biggest artists. Early reviews of the record have praised this skill set which reverberates in the new body of work:

Drew Love and Dante Jones have reinvigorated sex-pop by adding a little grungeIn the woozy wake of Drake, The Weeknd, Bryson Tiller and Post Malone’s über-laid-back R&B, you’d have thought there was simply no more room for navel-gazing, sex-fixated dudes with bachelor pads full of Sade records, lava lamps and above-average-priced vodka. And yet here come the rather impressive THEY., oozing sauciness as well as some of the most deeply atmospheric tunes this side of The Weeknd’s 2015 smasher ‘Beauty Behind The Madness’.
By slightly twisting the sex-pop formula with the addition of gritty guitars, Los Angeles-based vocalist Drew Love and producer Dante Jones manage to reinvigorate the smooth sound of the millennial bunk-up with grit and edge borrowed from the class of 1993.
THEY. are here not just for your ears, but your entire being. Let them have it.
(NME, 4 of 5)
When listening to “Nü Religion: Hyena,” the debut album from R&B duo THEY., you notice the little details. Every 808, vocal flourish or guitar hit is placed carefully in the mix. Mysterious vocal melodies linger in the background, haunting the album’s thundering beats. Every now and then you hear a sound you don’t expect, something you can’t quite place – a choppy, distorted piano line or percussive hit. Oh, and plenty of guitar.
The distinctive sound makes sense coming from a pair of artists who are experienced beyond their years. THEY. have studied and internalized their craft as it was honed by the great writers and producers that came before them, but know when to try something different. (Red Bull)
The album kicked off with THEY. celebrating release week with a series of first listens on Apple Music’s Beats 1 Radio.  Each day, a new track was launched starting with “Silence” with Julie Adenuga on Tuesday, a world premiere of “All” with Ebro on Wednesday, and “Dante’s Creek” on Thursday as Zane Lowe’s “World Record.”
On the album’s title, Drew told Ebro in their interview, “Nu Religion was not only just the name of our first EP but it was kinda like a belief system that we have. Really were just about empowering people to really make a difference in this world, to really try new things, to really break the mold from what other people are doing. [This] is the next chapter of the Nu Religion and it’s called Hyena, which is really about expressing yourself, being an individual, being everything you can because I feel like right now a lot of people are really doing a lot of emulating…they’re really not expressing themselves the way they truly could.”
THEY. will take the LP to on the road in their first headlining tour in March.  Tickets to the 20-city Nü Religion Tour are available here.  For every ticket purchased, fans will receive a copy of the new album.  THEY. are providing fans and local artists in each city an opportunity to open for them along the tour. The band announced this unique support of local talent on their socials and their Reddit AMA.  Aspiring hopefuls can also enter at https://unofficialthey.com/pages/submit.
The award-winning R&B duo individually cut their teeth writing and producing with some of music’s top stars.  Brought together by a mutual friend during a studio session, the Denver and DC-natives immediately clicked on their eclectic tastes such as The Weeknd, Taking Back Sunday, New Edition, Nirvana, Jeremih, Pharrell Williams, Lil Wayne and Slim Thug.  Under the guidance of mentor Timbaland, THEY. refined these unique foundational influences into a sound all their own.  Following a hit dance collaboration with Skrillex and Mind of a Genius Records label mate/friend ZHU “Working For It,” THEY. dropped their acclaimed 3-track Nü Religion EP which has racked up tens of millions of streams on Soundcloud and Spotify.  The EP would lead to an offer from Bryson Tiller to join his worldwide “T R A P S O U L” tour, a performance at the inaugural ComplexCon, and touring with PARTYNEXTDOOR and Jeremih for their “Summer’s Over” tour.
“Nü Religion: Hyena” is available for stream or download at iTunes, Apple, and Spotify.
“Nü Religion Tour” routing
3/7 – The Crocodile – Seattle3/8 – Alexander Gastown – Vancouver3/10 – Social Hall SF – San Francisco3/11 – Constellation Room – Santa Ana3/12 – Club Red – Phoenix3/14 – The Cambridge Room – Dallas3/15 – Warehouse Live Studio – Houston3/18 – The Parish Room – New Orleans3/19 – The Loft – Atlanta3/21 – Songbyrd – Washington DC3/22 – Underground Arts – Philadelphia3/23 – SOB’s – New York3/24 – Middle East – Boston3/26 – Mod Club Theatre – Toronto3/27 – The Shelter – Detroit 3/29 – Double Door – Chicago3/30 – Fine Line – Minneapolis 4/1 – Larimer Lounge – Denver4/3 – Voodoo Room – San Diego4/4 – The Roxy – Los Angeles