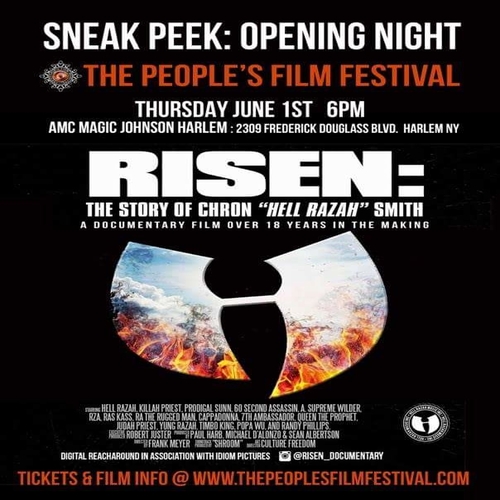 on June 1st, 2017 in Harlem, New York, Wu-Tang affiliate and Sunz of Man artist, Hell Razah, premiered his upcoming movie/documentary “Risen” at the People’s Film Festival. The movie received excellent feedback, as the viewers were privy to what should be a very revealing and compelling film for all fans of hip-hop and the Wu-Tang Clan to enjoy. Check pics of the screening below, and stay tuned for movie release date. In addition, be sure to grab the recently released “The Xtra Files: Wu-Files Special Edition, Vol. 1“, featuring Hell Razah & Various Artists.
Follow Hell Razah on Twitter. Only on DubCNN. Wu Tang Clan affiliate Hell Razah has always been a celebrated MC, known for his sharp lyrics and intricate flow. A founding member of the group Sunz Of Man — who cracked the Billboard Top 20 with their 1998 remake of Earth, Wind & Fire’s classic “Shining Star” alongside the band, Wyclef Jean and Ol’ Dirty Bastard — Razah was discovered and mentored at age 14 by Wu Tang leader RZA and groomed for success. Later dubbed “Heaven Razah” when he went solo in the mid-2000s, the rising young MC made headlines when he was stricken with a brain aneurysm in 2010.