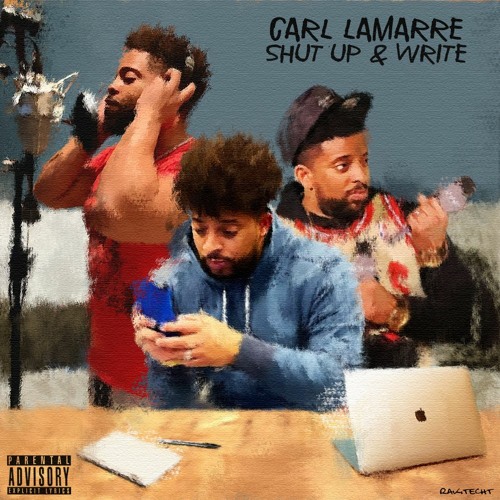 Established Billboard Hip-Hop Editor, Carl Lamarre, returns to the booth to revive his rap dreams and drops the new project, intriguingly-titled, Shut Up & Write. Led by the song “Black 100,” the Long Island-bred recording artist introduces himself to a new era with a revealing 10-song collection, powered by TWT & BCG.

Surprising most adding rapper to his resume, Lamarre announced the album was in development Summer 2020 and released a slick-tongued, appealing and therapeutic body of work last November. Throughout the project, Lammar addresses failed love life, career highs and lows and family trauma. Across accredited guests, Carl and his conscious flow hold its own and shocks-and-awe from beginning to end.

Shut Up & Write enlists guest appearances from Mickey Factz, Elijah Blake, Rob Markman, Grey Genius and Gerald Walker. The project’s referrals include “Dreamers,” “Pure” and “Coming Home.” Lamarre’s latest is the perfect jump-on point for any newfound fan as he promises new music and a debut album in 2021. Whether a news article or verse, Lamarre proves his pen game is impeccable. Shut Up & Write is executive produced by former Maybach Music Group artist Stalley, Mark Elibert and Carl Lamarre-himself.