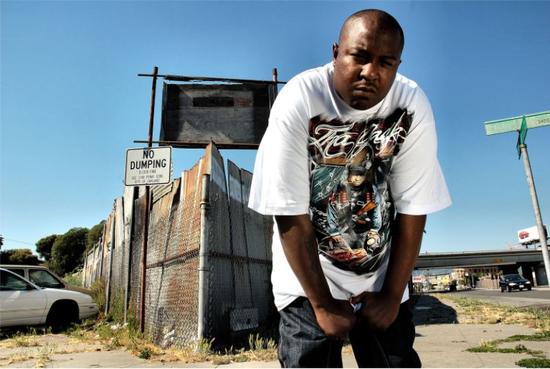 DubCNN sat down with Bay Area rapper The Jacka to talk about his new album “Tear Gas”. He tells us about the making of the album, working with Devin The Dude and Freeway, and the many other artists he collaborated with on his album.

Jacka also tells us about the future of the Mob Figaz now that Husalah is out, and he touched on his current relationship with C-Bo. We also speak about the Bay Area scene, which up and coming artists to watch out for and Jack spits some knowledge for the youngsters.

DubCNN: We linked up with The Jacka today to talk about his new album “Tear Gas”. I ran into you the other day at Yukmouth’s in-store for his new album at Rasputins, and a lot of people came out to support: Keak Da Sneak, Mistah FAB, Dru Down and yourself amongst others. Is that something that ya’ll do often, or was that a rare occasion?

You know, Yuk lives in L.A., so everytime he comes up with come f-ck with him, and everytime we go to L.A., we go f-ck with him. But everybody out here, we all pretty much get along with each other man. It ain’t really nothing, it’s love, the way you see artists come together down south or in the mid-west. We do it the same way. Everybody got a name for themselves, but we’re all cool with each other. So if anyone of them people that you seen had something going on, we would have all been there, same way.

DubCNN: Your album “Tear Gas” has been a long time coming. Now that it’s out, did it come out the way you originally wanted it to?

I had to run it through a new distribution and to leave a few songs off the album due to some samples that I couldn’t clear, but other than that it was something new. I sold a lot of records, at a faster pace than I have in the past. It’s a new experience for me, I like the music. It’s definitely setting the bar real high for up and coming artists trying to come out. You gotta see what else is out there and what your competition is.

DubCNN: You got a lot of features on the album, how did you pick the artists that you wanted to collaborate with?

I f-ck with who f-cks with me. Whoever is cool with me, that’s who I’m cool with. A lot of them were just feeling what I was doing anyway, so we just got down. Pretty much everybody on the album is a good friend of mine, so it ain’t like I had to go all out and search for these guys or nothing like that. It just happened.

DubCNN: My personal favorite is the song with Devin The Dude, how did you hook up with him?

My producer MG, he had Devin in the lab, he came to town while I was working on my album. I came into the studio, I was loaded as usual, gone off the lean, I was leaning like a muthaf-cka. That’s when I was on it heavy. Sh-t, he was a cool ass cat, real laid back, he looked past the fact that I was leaning hella hard, so I couldn’t really express myself as much as I wanted to to him. The raps and everything was cool, but I really wanted to holla at him a little more at that time. But I was so loaded that I couldn’t do it. But it was cool, he’s a real cat and I get a lot of compliments on that song.

Freeway came to town, same way. He’s a cool dude, we burnt a couple, had some cherry pie. Cherry Pie is the new sh-t out here, the new weed we smoke out here, only a very few selected people get it. We got some of that, smoked, listened to a couple tracks and he was like “This one!”. He hopped on, that’s it! He’s a muslim, we’re both muslims, so you get a automatic bond with somebody who’s a muslim and who’s doing the same thing you’re doing. It ain’t no reason not to do it.

DubCNN: Would you say that you being a muslim influences the music that you make?

Yeah, definitely. I have to teach people the same way I was taught. It’s tough, we all live a certain lifestyle, but the ultimate goal is to become muslim, one who submits his will to God, 100%. It’s a lot of traps on the way to keep you down, but we just look at that as the mental war you gotta try to overcome. It ain’t easy, we’re only human, and Allah has given me a lot of chances and a lot of breaks. We’re just trying to work with what we’ve got, do our best and be our best. It definitely influences my music, there’s an Islamic message in my music for sure.

DubCNN: Can we expect a video to come out from your album?

Oh yeah. I got the one with me and Cellski, we just shot that video, so that’s gonna come out. Then I got the one with Andre Nickatina, “Glamorous Lifestyle”, that’s about to be out. We finna shoot a video for damn near every song on the album, so watch out! We’ve already got ideas on how we wanna do most of them, so look for that.

DubCNN: Have you seen him since he’s been out?

Yeah, I’ve seen him since he’s been out, a few times. We still get it in, he gotta do what he gotta do to get that sh-t off his deck. He’s in a halfway house right now, which means he can only stay out till like 2:30pm, or he would be here right now! He just gotta do what he gotta do, it’s unfortunate that sometimes sh-t like that happens, he’s missing out on his family time, and trying to do the rap thang and all that, he’s caught up. That’s why some of you young n-ggas, you really gotta look at that sh-t and learn from it. A lot of sh-t come along with f-cking off in the streets man.

When something like that happens, it’ll all f-ck you over in the long run. It might work for a little bit and you’re having fun and living life, but then when it all comes down on you, you probably don’t wanna deal with that all the shit that comes along with it. If you do it, you gotta just learn to not f-ck with muthaf-ckas, period, and use your own brain. If something don’t feel right, don’t f-ck with it. Just try to do something to better yourself, better your situation. Muthaf-ckas only sell dope to better their situation, not because they’re trying to be cool or no shit like that. I know people from the ghetto, though. Learn from our mistakes and muthaf-ckas who you’ve seen f-ck themselves. Once you’re in the feds, you’re -ucked! And you f-cking the n-ggas that’s around you too, cause you’re hot! That makes us all hot. So ya’ll n-ggas be cool out there, man.

Hell yeah! That’s all people have been talking about! Me, I’m with it, I’m already with it! I’m just waiting on a few things, once that is out of the way then it’s gonna be over! That boy Fed-X he with me everyday, I’m just waiting on a few people, get everything out the way and then we’re gonna kick in! Once Hus gets out of his little situation, that’s really what the big wait is. We’re waiting on him to get out of his little situation over there at the halfway house. We’ll be in the lab everyday!

DubCNN: The first time I heard from the Mob Figaz was through C-Bo. What’s your current relationship with him?

He’s still the man. We still love C-Bo man. When you got genuine love for somebody and sh-t, it don’t go nowhere. We never fell out or no shit like that. He’s a thug, he’s a sav, he goes to prison just like everybody else. He get locked up, he do what he gotta do to support his family. Sometimes, when you’re out there like that, that’s the type of sh-t that happens. But if it wasn’t for Bo, I wouldn’t be sitting in this chair right now telling you anything! You know what I mean? I gotta respect that n-gga for the rest of my life, no matter what. I’m hella happy. I love that n-gga, man. We all still get along and nobody ever fell out with nobody, it was never no problems, no beef, we never broke up, it’s still the same sh-t!

DubCNN: For those who ain’t up on the Bay Area scene right now, who would you say are the top artists from the Bay right now that we should be watching out for?

Definitely the Mob Figaz man, every one of my n-ggas is ridiculous. D.B. The General, he’s hot, Sleepy D is hot, Dubb 20 is ridiculous, the list goes on and on Young Scoop. Zo The Roaster he’s hot. These are young hot cats that I’m naming. But we’re always gonna last, keep it lit and keep that dope sh-t coming.

DubCNN: Alright, before we go is there anything else you wanna let everybody know?

If you wanna check me out hit me up on the MySpace I got the music and the videos up on there. Hit me on Twitter too, It’s numerous things you can do, You can go to iTunes and download everything I’ve ever owned or put out. You can go to a local moms and pop store and buy the CD’s. Everything you can do to support The Jacka, cause I ain’t gonna let you down baby!