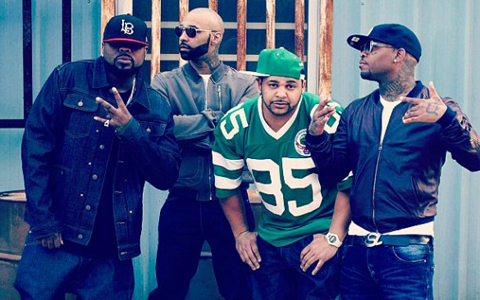 In recent weeks we’ve been building up to the planned release of the long awaited Slaughterhouse debut album – “welcome to: Our House” – via Eminem’s Shady Records on August 28th 2012. The supremely talented lyrical quartet – Crooked I, Joe Budden, Joell Ortiz and Royce Da 5’9 – had released the video to My Life featuring Cee-Lo Green, confirmed “welcome to: Our House” would be executive produced by Eminem, released the Mr. Porter produced lead single featuring Swizz Beatz entitled Throw It Away that you can cop on iTunes and announced a DJ Drama fronted “Gangsta Grillz” mixtape by dropping the Weight Scale buzz-record over the Nas’ “Nasty” instrumental.

At the start of this month DJ September 7th released his free House Arrest project to whet the appetite and today we can drop off the FREE Download and Streaming Audio of the DJ Drama fronted “Gangsta Grillz” mixtape “On The House” that features 13 cuts including Weight Scale.

We’ve also just go our hands on a new record said to be from “welcome to: Our House” that features Eminem entitled “Throw That” – listen below!

“welcome to: Our House” drops via Eminem’s Shady Records on August 28th 2012 – until then support the Mr. Porter produced lead single featuring Swizz Beatz entitled Throw It Away by buying via iTunes.