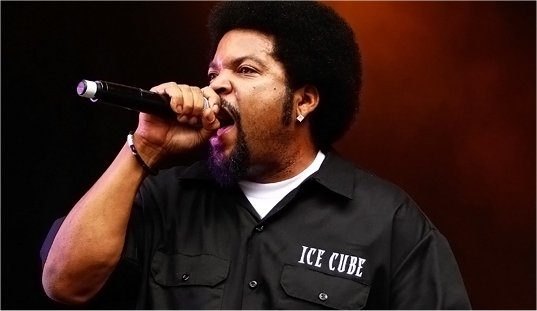 As we’ve been reporting since May, the West Coast War Lord Ice Cube is gearing up to release a new LP “Everything’s Corrupt” before Spring 2013.

New music from the LP has been scarce – in fact all we’ve heard from Cube lately was his Oakland Raiders anthem “Come And Get It” as part of the on-going Pepsi NFL Anthems.

Today that has changed with the release of the video to the title track from the album, being released in conjunction with next weeks elections – as you’ll see Cube has something to get off his chest, as he indicated in his Rolling Stone interview last week. Of Republican presidential candidate Mitt Romney Cube said;

“I don’t see how anybody could believe what that man says, He just reminds me of somebody who’s trying to sell me a Mercedes Benz. He’ll tell me that it looks good on me and this is my color and I can afford it and everything, just to get the sale. It’s astonishing that people are buying into that at the rate they are.”

Ice Cube- who has never shied away from politics – says the track speaks to the corruption rampant in everything from politics to education to sports, but he notes that he was particularly inspired by the 99-percenters who spearheaded the Occupy movement;

“That right there was basically the classes clashing. You were able to see the power of the rich really trying to step on the poor. It was really clear, it was really in your face. Corruption was in the air and everywhere.”

Ice Cube recalls playing “Everythang’s Corrupt” for the first time and thinking the record needed something to “kick it up another notch” – so he enlisted Rage Against the Machine guitarist Tom Morello – someone he’d long thought about collaborating with. He sent Morello the cut without any instructions and let him do his thing. “He added crunchy, funky riffs and a screeching solo to close out the song.”

Ice Cube added that he’s been following this year’s presidential race rather closely. The rapper praised President Obama for the work he’s been able to accomplish despite “a do-nothing Congress and the Party of No,” and he hopes if Obama is re-elected, he’ll focus on jobs and ending poverty.

“We have to deal with that, We’re never gonna give what we need to give as a country if some of our citizens are lower than Third World.”

Cube went on to say that while Everythang’s Corrupt will have its fair share of politically charged moments (like the song “Dominate the Weak”), it’s not a wholly political record. For instance, there’s “Damn Homie,” which Ice Cube says with a laugh, is about “a dude that was the shit in high school, and I see him now and he’s fat and looks like Homer Simpson.”

The MC says getting back into the studio felt easy and natural.

“I try to work in a pure way, being independent, to me, it’s more of a boutique type of deal – you should not be a trendsetter, you should kinda do your own thing, and people will appreciate you for that.”

Word to Cube on that – check the title track video below – produced by Fredwreck: