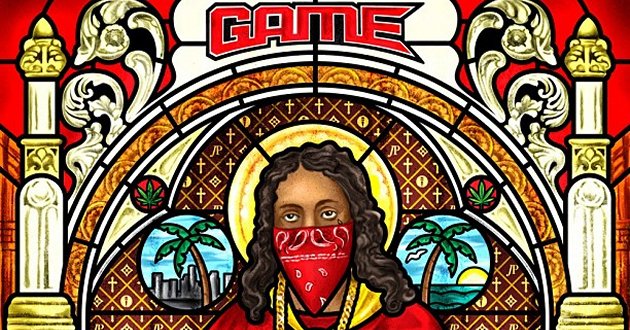 As we’ve been reporting for weeks now The Game has been gearing up to release Jesus Piece his fifth studio album.

The day has arrived and the 16-track deluxe offering – available on iTunes –  has arrived. The GRAMMY-nominated, multi-Platinum artist Game fulfils his Interscope Records album commitment with this release and follows up 2011’s The R.E.D. Album with a feature packed, fresh sounding new LP.

When asked about the release recently Game explained;

“The Jesus Piece album concept came together while I was recording a song that eventually became the title track.  It was this song that inspired me to create series of recordings themed around experiences and feelings that I hope everyone can relate to on some level. I have an amazing collection of artists helping me deliver the ‘good word’ and I hope the fans will receive it as one of their favorite hip-hop albums of the year.”

With that likening in mind he’ll be pleased with the reception Dr. Dre gave the album in a text message that Game made public via Twitter

“Your album is Dope. The song with the D’Angelo sample [‘All That’] is fuckin Crazy. Great job. Congratulations!!!!”

So we urge you all to hit your local store today and cop Jesus Piece or alternaitvely buy online via iTunes and swoop the Deluxe Edition! To whet you’re appetite we’ve put together a mix of the best #SundayService cuts and promo tracks for you to listen to below! Editors Note; we’ve just added the Bonus Tracks “Dead People” produced by Dr. Dre and the Shyne, Diddy & G-Unit Diss “Blood Of Christ.”