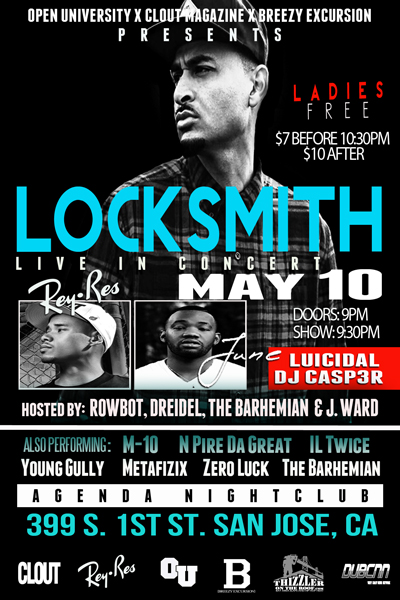 This friday, DubCNN has teamed up with 90.5FM KSJS, Open University, Breezy Excursion, Clout Magazine and Thizzler.Com in putting on a dope show in San Jose, CA at The Agenda Lounge.  Just in time for the release of his album #TheGreenBox which drops later today on iamlock.com, Lock will perform in San Jose just 3 days after the release. Also performing at this show are San Jose’s very own Rey Resurreccion, who was just selected as one of the 30 prospects in consideration for the Bay Area Freshman 10 presented by Thizzler.com. Also performing are Memphis, TN’s June, a fresh new artist, whose project EVOL was a breath of fresh air last year,  and Oakland, California’s very own, Young Gully, who just released his mixtape #HM5 on Thizzler.com. This showcase will also feature performances from I-L twice, N Pire Da Great, M-10, Metafizix, Zero Luck, Dreidel & The Barhemian. Check out the flyer below, and more info on artists as well: