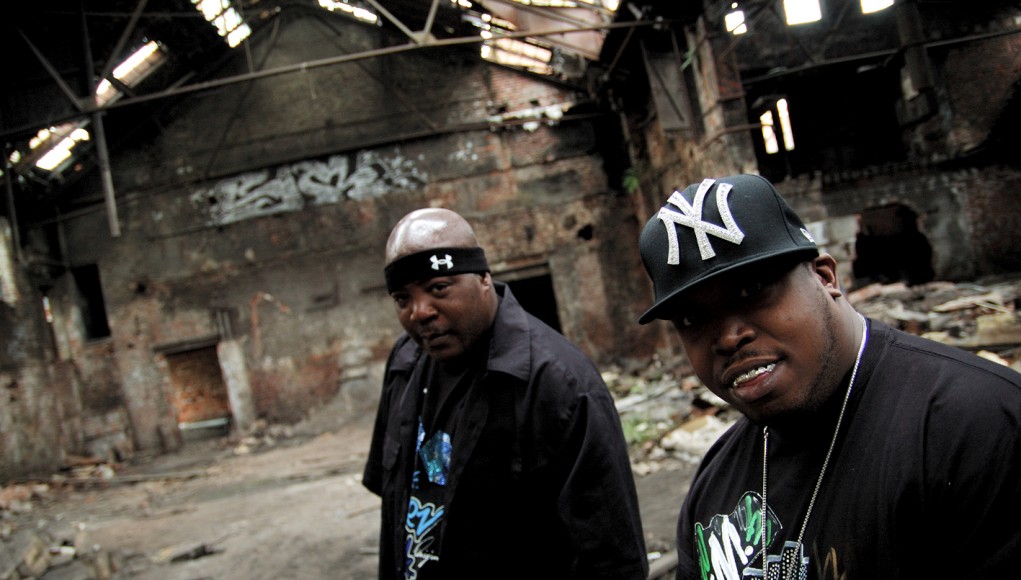 DubCNN caught up with Lil Fame of M.O.P. (Mash Out Posse) for a long overdue exclusive interview!

In the interview we find out how the duo got their break, they discuss their take on music now vs when they first set out and even delve into how regions influence each other.

Ever wondered who was the groups favorite collaboration? Want to know who on the West M.O.P. rate in their top artists? Their Top 5 of all time? Find out all this and more…

DubCNN: M.O.P. is definitely a legendary brand in the hip-hop game…while dominating the underground scene for quite some time, and gaining commercial success on songs such as the classic, riot starting anthem “ANTE UP”, feat. REMY MA. As veterans in this game, what is your view on hip-hop today?

Hip hop today, I mean it is a different thing now then what it used to be. The quality and the production equipment has changed and that all plays a part in the difference of the music. Nowadays you can go online and download everything you need to make a beat. My era you had to do the reel to reel and every tape that you did on the mic and every take had to be perfect. You had to do the chorus every time when you were recording a song. There was no sending vocals from California to New York for example to make sure a song was done. The style of the music has also gotten younger to me. I am into it all, all styles of music, now some of it I can’t f*ck with because I am from that Golden Era. It was about lyrics but today it is not about that, it is more about how you look and what kind of clothes you have on and you know when I am in the club and ladies are dancing I don’t mind listening to trap music. Me personally I would throw on some Biggie, Nas or
NWA. The DJs be acting like they into the music that they be playing but they all play the authentic sh*t when they go home too.

DubCNN: Being artists on several major labels throughout your career (LOUD RECORDS, ROC-A-FELLA RECORDS, G-UNIT RECORDS, etc.), M.O.P. has rocked the mic with several of hip-hop’s luminaries. In retrospect, what was your experience like on some of these labels? And what is your current label situation?

Right now we are on Nature Sounds Records. We just dropped an EP, and for the new era this is pretty much considered a mixtape and we are too old to be dropping mixtapes. We have been away for a minute and it is just letting people know we still here. We just dropped a video with Busta Rhymes and the EP is called Street Certified. As far as the features, I have done songs with pretty much everyone in the industry except 2 Pac. Everytime I am in the booth it feel like he is in there.

DubCNN: That leads into my next question. M.O.P. has collaborated with some of the greatest MC’s in our day (JAY-Z, 50 CENT, BUSTA RHYMES, JADAKISS, STYLES P, REDAMAN,etc.). Do you have a favorite collaboration?

I got to say Big Pun.

That is how we met Remy Ma. Pun was just so down to earth and we would just be in the studio talking so much that we would never get the songs done. It was like that for a week, and Pun is so funny that he would have you in fucking tears. We did the song and it worked out for us because Pun is not an energetic rapper, that is more our lane.He played his part, because we have had alot of rappers that have tried to do songs like us. The dopest song I believe I have not made it yet.

DubCNN: Who is your Top West Coast MC of all time?

WC is my n*gga, got to give it up to MC Eiht, Eazy E and the whole Ruthless click, Ice Cube is one of my all time favorites, Kendrick is bad as a muthaf*cka. The dopest rappers are ones that come up with ideas I wish I came up with.

DubCNN: If I am correct, LIL FAME recently produced/executive produced on several WU-TANG related projects (WU-TANG CHAMBER MUSIC, LEGENDARY WEAPONS,etc.). Have you always been a primary producer on M.O.P. projects and who else have you produced for?

Yeah shout out to Wu Tang, I did work on Ghostface’s new album. Styles P, Cam’ron, Foxy Brown, AZ, Cormega, alot of the greats. Even Ray J I did a joint for. I just love good music.

DubCNN: How did each of you (BILLY DANZE and LIL FAME) get your start in the game?

Lazy Laze is one of the dudes in my neighborhood had connects in the game. He had a cousin that used to hustle in the building that we grew up in. I used to make demo joints in D.R. Period’s crib and I did a tape and he passed one off to Lazy Laze. He got me out the hood and would take me to clubs and studios. Around this time Billy was away on vacation and that was my road dog so he was running with me. Billy was rapping before me but I had the access to the studio off 4th and Broadway. That is where we did How Bout Some Hardcore. M.O.P. was already our street name, you know mash out posse means an ass whooping.

We just ran with that name as a group and we repped that in our music.

Me and Danze grew up on the same block. I cuss alot and I think I get that from my Mom! My Mom is from Trinidad and she will cuss your ass out. The flow is from ping ponging ideas off of each other and I know when he go hard, I need to compliment what he is doing and vice versa.

DubCNN: What is your opinion on certain urban West Coast culture behaviors, influencing urban New York as well as other parts of the country?

When you had the whole so called east coast west coast beef, outside of Wu-Tang and Mobb Deep, it was not who New York was. It was real shiny at the time, and shout out to Dr. Dre and Snoop Dogg because their music at the time was raw, street sh*t .They would curse a motherf*cker out and I love that kind of rap. It ain’t just ignorant, they will tell you why also!

And they say it so poetically. That played alot in my upcoming. Now we had in New York Kool G Rap that would spit the raw shit as well, KRS One also, but the west coast commerically had monster street records. Partying and bust your head sh*t all on the same song.

It stayed street but without getting jiggy. How was it growing up for you in New York? I am from the crack era and everyone has a story to tell. I am sure my hood is just as hard as someone else’s hood with similar stories, but in my hood we grew up around certified killers man.They would be chilling in the hood after knocking someone off and just be chilling like nothing happened. My moms getting shot, all types of crazy sh*t going on. My avenue was like a car show, our shit was hands on with it.

DubCNN: What is your opinion on the radio politics that plague the hip-hop game today?

It is what it is, I am not a cry baby about it. They never gave us love in our 20 year career, Ante Up they did jump on that record because it was so big in the clubs. For the most part, radio has been threatened by our music and that is never going to change.The mixtape DJs that is more our lane. These are the people that break records and the DJs that are just playing what they think is hot, they are not hot anymore. It’s not even like they can play the records they want in the first place. It’s more of a playlist format on the radio now. This is FM radio I am talking about. Out here DJs be screaming keep real New York music alive. They do that for about 2 songs and go back to playing what everyone else is playing. It is what it is, people got to pay they bills and I can’t change that. I just don’t change up what I do. Unless you are part of the machine, do not expect heavy spins on the radio. I know when I walk down the block the real people know what time it is with the music.

I might piss some people off, let me see. Kool G Rap, Rakim, Grand Puba, Eminem, and Nas. That ain’t my main order, I just came up with that right now.

DubCNN: *Laughs* That is the best answer I have got from that question, on my momma.

Figure it out yourself.

The new album will be dropping right after the EP so be on the lookout for that.

DubCNN: Tell the people where they can reach you on social media?

DubCNN: Any last words y’all? And thanks again from DubCNN.

Shout out to yall for f*cking with me man.