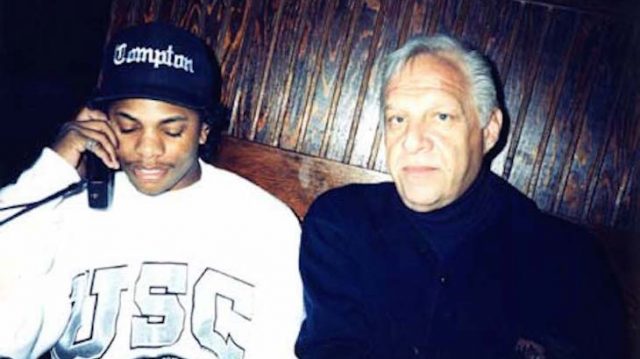 Jerry Heller, the original manager of NWA and has passed away at the age of 75. The cause of death is currently unknown, but sources say thst Jerry was battling a heart condition and other health issues for the last few years; recently showing a dramatic weight loss. Before working with NWA, Cleveland, Ohio native Jerry Heller managed rock and r&b artists such as Marvin Gaye, Ike & Tina Turner, Otis Redding, War, Average White Band, Black Sabbath (Ozzy Osbourne’s original group), the Four Tops, and others. Heller managed The World Class Wreckin’ Cru (which included Dr. Dre and DJ Yella) and CIA (which included Ice Cube) before meeting Eazy-E in 1987 and co-founding Ruthless Records with him. Ruthless would go on to sell over 100 million albums from artists NWA, Bone Thugs-n-Harmony, The DOC, Michel’le, JJ Fad, as well as Eazy-E. Eazy-E would eventually drop Heller as a manager amidst shady business allegations. At the time of his death, Jerry Heller was in the midst of a lawsuit over his depiction in the movie “Straight Outta Compton.” In 2006, Heller published a memoir, “Ruthless” which was his attempt to tell his side of the “Ruthless” story. Heller had tried to develop “Ruthless” into a feature film — it was his preference for Larenz Tate to play Eazy-E — but was beat to the punch by “Straight Outta Compton”, released in August 2015. The biopic, directed by F. Gary Gray and starring Paul Giamatti as Heller, was a box office hit, grossing $201 million domestically, and was nominated for an Oscar for original screenplay. Heller was angered by the film, which he claimed portrayed him in a villainous light. In October, he filed a $110-million libel suit against Dr. Dre, Ice Cube, NBC Universal and others involved in its creation. Much of the case was dismissed in June by a federal judge.