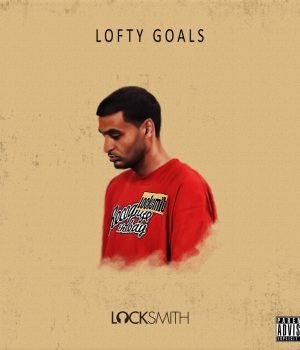 One of hip-hop’s true journey men, Locksmith has traveled both far and wide, embarking on a career path filled with more than its fair share of valleys and peaks. Yet he has found his direction as an artist while simultaneously strengthening his sense of self in what has been more than a lengthy process. From battle rap to battling with the passing of his mother, the Richmond born rhymer has always fought for his place in & out the artful arena of rap, showcasing both his gladiator mentality and grit.
Documenting his ascension in recent times, the Bay Area bar droppin’ dynamo began rising to new heights with the release of The Green Box (2013) project. He then took another career defining step with A Thousand Cuts (2014), and further propelled himself with his last potent & personal project, Lofty Goals (2015). In celebration of its recent one year anniversary, we will revisit both his refined rhyming and content, and the multi layered impact this album carried in its essence. Lofty Goals, the title itself sets the bar high, demanding dreamers to excel in their endeavors. Whether defined as dreams or aspirations, Locksmith ups his own expectations & in doing so, inspired his listeners to do the same.
Utilizing his talents as a vehicle, Lock has narrated and navigated his fans through his life’s ever winding roads. Dependent on his moral compass, coupled with past experiences to lead, this is one of the game’s few rappers that embraces being a role model for the up and coming generations. Having been in the crowds at his shows, whether big or small, he as his audience, is always fully engaged. He performs with conviction, rhymes with reason, and adamantly aims to uplift his listeners through his songs and stories. Setting the foundation for the album with lead off record “Lessons”, the already lyrical legend openly reflects on the countless teachings he’s endured, and continues to encounter over a soulful piano laced production. Sounding more at peace with himself & where he’s at with life, he never ceases to stride through his struggles and embrace them as inspiration for his artful ambitions. Transitioning to his next record with “Careful”, Lock revises himself and his surroundings, taking note of both the causes and effects that have coincided in creating the humble yet lyrically arrogant artist he is. Channeling his experiences into honest expressions tailored with gripping detail and delivery, “Find Me” grows from those same roots, developing over a somber piano with a cadenced call for help for the chorus. Filled with questions and in search of answers, Lock finds strength and solace in sharing his testimony, liberating himself and his listeners through his hard lived lyrics. Further opening up on “Boxes”, he continues to unpack personal emotions stemming from a turbulent relationship that has long crashed and burned. Airing out his differences and difficulties over an airy production, he attempts to vindicate himself of a past that is still presently powerful in his life.
Seeing life as it is, Locksmith calls in his first notable features in former Funk Volume artist Jarren Benton and Futuristic to emphasize their mutually shared blindness for everything other than success. A collective of witty and gritty rhymers, this talented trio tear through the beat, and show why they’ve amounted the levels of success they have as independent emcees. Fully focused with his sights set, he continues exhibiting his intricate interpretations of life on “Tell Me Sh**”. Now whether perceived as cocky or confident, Lock is one artist that has undoubtedly earned all his accolades through his dedication and diligence. Tutored by his uncle & brother(s), he took those early teachings and applied them to the rap game in order to maneuver through the endless facades & fuckery that fills it.

Moving on, “Open Doors” is yet another honest reflection of rhyme from a conflicted brother, son and artist managing his personal life while actively pursuing his dreams. Followed by “Sure As Can Be” featuring Connecticut’s Chris Webby, these battle tested emcees tag team the sampled production with a barrage of bars both entertaining and equally enlightening if listened too, but more so highlighting their raw rapping abilities overall. Opposite this joint, “Plot Line” falls in with a much more graceful sound and an evolving tempo set with soulful breaks for Marc E. Bassy to belt his heartfelt hook. Contemplating on deeper levels, Lock speaks to the trials and turmoil we subject one another to on a daily basis in our societies. Providing a different view and perspective, he seems to plunge into areas of the human consciousness that many, if not most artists, stay away from in the hip-hop forum.
Nearly an acapella of sorts, “The Love” sheds light on the selfishness that exists in all of us, and the various ways in which it manifest. Selfishness can either be a negative or positive trait depending on the circumstance in which the emotion is evoked, but is still something most have difficulty admitting or acknowledging. Lock holds no fear in touching topics that may be uncomfortable, but are critical and necessary at times. Switching moods with “American Beauty”, Locksmith laces a record for the ladies after bombarding ears with his brutal and brash bars, offering up a side of himself that stands contrary to his normally bittersweet take on relationships. Without pause he then jumps right back to it with “10 KONDRMS”, and re-morphs into the beast emcee we know him as, reminding us through his creative wordplay why he’s a world wide respected rhymer. Bringing this chapter of his already storied career to a close with “Fallen”, its no surprise that Locksmith leaves his listeners with his heaviest thoughts for last. Poetically pondering over a looming beat the social ills that not only plague him, Lock creates no solution, but dialogue that eventually could lead us to the solution(s) we seek. An advocate protesting through his art, he has always incorporated his sense for social awareness into his music, utilizing it as a platform to educate, as well as entertain. As transparent as Eminem with his material, Lock has made his fans family, and has remained an open book for them to always read. Maintaining his relatability with a humble approach, he has become a defining example of where hard work & the willingness to sacrifice will get you. We should all have goals, but it’s Locksmith that tells us to take it a step further and make them lofty ones.
A role model master of ceremonies, he continues to grow his catalog with his upcoming mixtape The Lock Sessions that will in turn help set the stage for his next album entitled, Olive Branch. A decorated vet in the game, sincere devotee to his fans, and truly dedicated to the craft, Locksmith is set to open up another door for all those still on the outside looking in on the lyricist’s who’s ultimate goal is set on longevity through substance in his music. To get a more in depth look into his life, check out his episode via our web series Inner Views: Life Behind Bars.