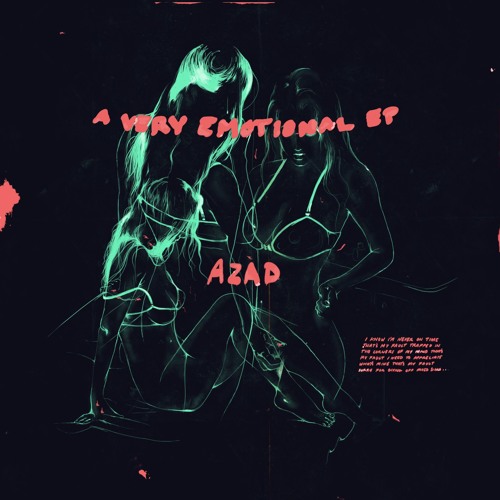 In a year stacked with incredible albums from almost every big-name artist, Azad comes through in the fourth quarter with his own offering. Poking fun at the comical amount of new releases today and in recent weeks, Azad ran a “smear” social media campaign to highlight how fast we consume new music.

As featured by Complex, Noisey, Revolt TV and MTV, to name a few, Azad has been steadily building buzz for the project with a slew of singles. Earlier this week, Azad paid homage to early 2000’s R&B group Pretty Ricky with his late-night slow jam, “Grind On Me”. Throughout this year, Azad showcased a variety of styles with the speaker rattling “Sweet”, the introspective “Goddesses”, the Sango, Atu and Dpat-produced, “Enough Of You”, and “instant addictive winner,” (Hypebeast) “Special”. Azad has repeatedly highlighted his versatility “with smooth vocals & slick rhymes,” (HotNewHipHop) and with the EP finally available everywhere, it’s clear that this extensive range of singles have found a cohesive home amidst Azad’s diverse soundscapes.

As the VP behind the groundbreaking label, Mind of a Genius, Azad has worked tirelessly to establish MOAG as “one of the most essential and future-forward independent labels out right now.” (Complex) Now, using the lessons he has gained from helping other artists navigate the music industry, he takes a rare moment to focus on himself and shine some light on his creative vision. As profiled by LA Weekly, “Azad has made selflessly championing others the guiding principle of his career.”

An Iranian-American who grew up in Section 8 housing, he is the son of famed poet Majid Naficy, who fled Iran after his first wife was executed by Ayatollah Khomeini, and has been blind throughout Azad’s childhood. Early on, Azad learned that in order to be a part of great things, he had to create greatness for himself and as he says,

Azad’s hard work is evident in his own musical output and the success of the artists around him. Breaking molds and creating the new standard, Azad redefines what it means to be in music. There’s no telling what lies ahead; stay tuned.

Azad Right’s music is an intricate and elaborate blend of aspiration, soul-searching, and lyrical prowess. Using complex rhyme schemes Azad Right kicks off the project’s lead single, “Goddesses” from the A Very Emotional EP, with a steadfast assault as he spits: “Change the game my prerogative, they ain’t use to a flow this provocative, but shit that’s no accomplishment / They used to incompetent, politician rappers all lobbyist / Say I’m cocky, they completely miss the concept of confidence”. Concocted to a flippant drum and bass beat, Azad confidently seduces the listener to this hypnotizing song.

The A Very Emotional EP is a classically produced project which combines intricately and cleverly worded lyricism with meticulous production and mixing throughout the 7-track release. Soncially, the project is a vast landscape of methodically laid instrumentation, allowing Azad Right to liberate his thoughts seamlessly on each track.
With the release of the A Very Emotional EP, Azad may have put together his most compelling work yet with songs like the aforementioned “Goddesses” and “Grind On Me”. – Chad Kiser