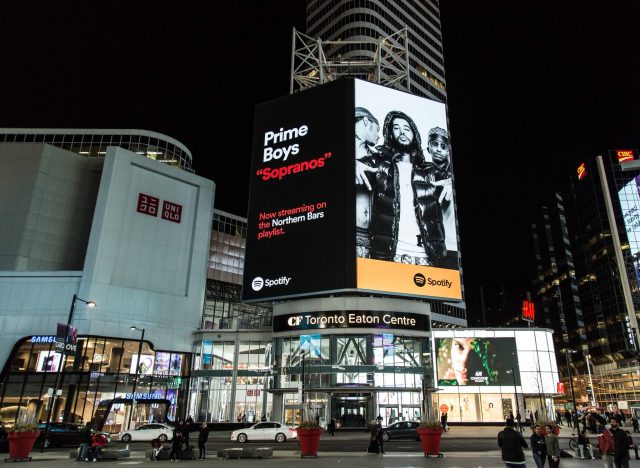 TAKE OVER HOMETOWN WITH TORONTO BILLBOARD

Buzzing Toronto trio, Prime Boys, share a new single entitled “Sopranos” today.
Get it HERE.
Right out of the gate, the bossed-up anthem attracted major love. Spotify showcased it on the popular Northern Bars playlist alongside Canada’s freshest talent. Meanwhile,Fader championed Prime Boys in this spotlight on the Toronto group. Bringing everything full circle, Prime Boys overlook their city from a massive billboard just erected in Toronto this week!
In a showing of bravado that’d undoubtedly make Tony Soprano proud, the trio, comprised of Jimmy Prime, Donnie, and Jay Whiss, lock into one brash bar after another on the verses before delivering an airtight hook on“Sopranos.” They’re set to drop the music video soon as well, promising yet another event-level spectacle.
It’s the perfect follow-up to “Tinted,” which is quickly approaching 1 million streams since release and garnered acclaim from Complex.
They’ve only just begun to shine like true bosses though. With close to 3 million views on their music videos and millions of streams on their music collectively, it doesn’t look like the Prime Boys will be slowing down anytime soon. A string of live performances and high-profile collaborations secured for the coming year are sure to propel the Prime Boys to the all-star status that they’ve been working hard to achieve.
Get ready for a lot more from Prime Boys soon.
LINKS:
“Sopranos”:
SmartURL: http://smarturl.it/primeboys-sopranos
Soundcloud: https://soundcloud.com/primeforever/sopranos-1/s-VPGo5
iTunes: https://itunes.apple.com/us/album/sopranos-single/1372082231?ls=1
Google: https://play.google.com/music/m/Bdhsi6owoou45rqh7m4muz2ccum
Follow Prime Boys:
@primeforever
@jimmyfromthe6
@jaywhiss
@itsdonnieitsdonnie