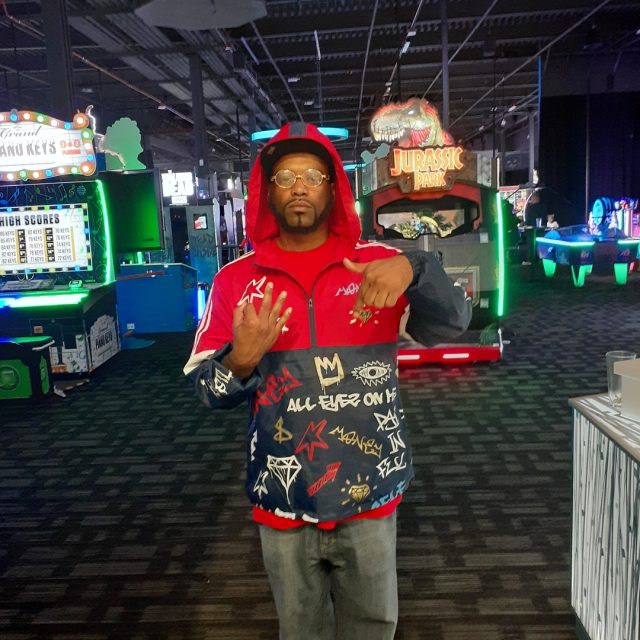 DuseM’$ was a troubled youth, birthed to a hustling mother and a gangster father. Although intelligent, Duse M’$, like his father, became heavily entrenched in the South Central LA gang culture, joining the notorious Bloods. As a result and to no surprise, he racked up numerous arrests, serving time in juvenile hall, camp, and C.Y.A. for assault with a deadly weapon. Frustrated with becoming just another statistic, a black male in a perpetual cycle of incarceration, DuseM’$ sought out another option. It was then when he turned to his one true passion, hip-hop. DuseM’$ decided to hook up with his OG homie and local hustler, Reggie Cudahay (President of JustAFew Records.) Next, he recorded his first demo (16tracks) under the pseudonym ‘Desperado Angelino,’ and even auditioned and qualified for the “Budweiser’s Best In The West.”

Discouraged by the stalled progress at Just A Few, as well as a conflict of interest, DuseM’$ returned to the Brims neighborhood and the fastlife of drug dealing and violent crime, mustering enough cash to resume recording music. It was then when M’$ really began envisioning ActiveChuckss. This was also about the time his then girlfriend, Lakeysha Andrews, became pregnant, at which time DuseM’$ made an honest woman of her, marrying her. Still entrenched in criminal activities, and desiring a better life for his family DuseM’$ made the biggest mistake of his life, resulting in his arrest on February 22nd, 2002 for conspiracy to commit armed bank robbery at the California Credit Union in Torrance,Ca. His dreams of ActiveChuckss came to an abrupt halt when the judge sentenced him to 120 months in federal prison.

In January of 2011, Duse M’$ was released to a federal halfway house, reawakening his dream of establishing ActiveChuckss as a relevant company in the underground hip-hop scene. DuseM’$ began recording immediately with superproducers Trak D, LeagueOfStarz and DTMakeshitz of Slaphouse Productions, resulting in the Still I Live mixtape, available now at datpiff.com. ActiveChuckss sold thousands of units out of the trunk of his Lincoln Mark Vlll while pushing the product. ActiveChuckss then partnered with local homeboy Wesley “G-Nutt” Crunk and YardDownmuzikInk assuming the responsibilities as President of Marketing and Promotions for the company. As a result of DuseM’$ marketing acumen, in conjunction with his drive and hustle, ActiveChuckss and YDM created a major buzz, performing at a multitude of venues including The Hoυse of Blues (Hollywood),The GClub, Club Cheetahs, Club Haute, and The Factory while recording music and performing with many major artists such as TyDolla$ign, TooShort, YG, JoeMoses, AVLMKR, JONGEEZY, REEM RICHES, MITCHYSLICK, OGELIFE, MUCHO DENIRO, MISTAH FAB, GOLDIE LOC, COMPTON MENACE, and Grumpy and LadyPinks of Hi Power Ent.

ActiveChuckss has also worked with Rob Lo (Crime Lab,) Tommy ‘Bigshots’ Martinez and a slew of other producers. Suprisingly to Duse, it wasn’t through association with hip-hop’s top tier hitmakers that ActiveChuckss gained it’s notoriety. In 2012, DuseM’$ and FiveStarEnt. AOB artist, Fingers, recorded the streetbanger “Hit yo Brimin.” The anthem was released as the first single on YDM vol. 1 #RNS via Hotnewhiphop.com and was co-hosted by Floyd Mayweather‘s TMT imprint disc jockeys, DJ J Bling and Ba, and DJ Caspa.

With a plethora of unreleased tracks, the success of DuseM ‘$ constituents, and the multiple resources available, the dream is currently manifesting.