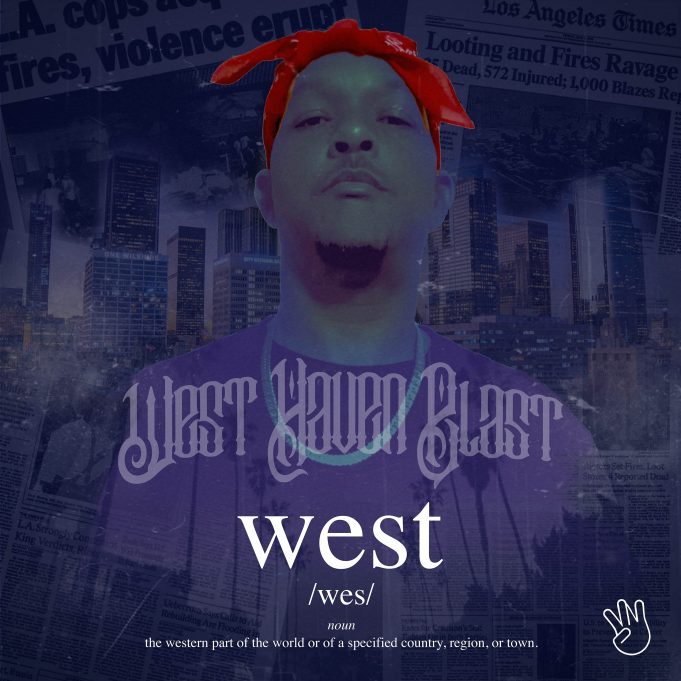 West Haven Blast has been relentless in 2021 with albums and videos dropping across the first four months!

Back in January Haven dropped “The G Funk Era, “the follow up to “The City Is Mine” in 2020, quickly followed by “24 Hours” with appearances from Ras Kass, Kurupt, DMC of Run-DMC, Killah Priest, Planet Asia, Kxng Crooked, and Redrum 781 – and then a 7 track EP, titled simply “WEST.”

In under 30 minutes the release hits early reppin’ his While the release features Kokane, Epademik, South Central Cartel, Deuce Maxwell and Redrum 781 – there are still 4 solo tracks where West Haven spits for his city, and his coast.

“WEST” opens with the ode to his city ‘Straight Outta Compton’ where he cleverly mixes in a nod to countless legends of hub city – from DJ Quik to BG Knoccout – the G-Funk whistle is ever-present on this opener and sets the scene for the upcoming six tracks.

Next up ‘I’m A Hustla’ features the unmistakable Kokane lacing the hook;

‘I’m a hustla, no busta, self made, bitch i never trust ya – i’m a go-getta…I stick and move, I never snooze”

Epademik is up next and rips over the deep throbbing bass…

‘”they say dont stay so damn ignorant, i play the role of a disgruntaled bitter man”

…handing back to West Haven to close out the track…

“Too late to hate b*tch we already did it, you need a time portal, theoretical physics”

After ‘I Thought You Knew’ – a track he dropped this video for this month – the deep bass, synth heavy ‘Real’ is the next solo cut. Haven reminds listeners that he ‘keeps it real, with those that keep it real with him’ – a lesson to heed as he unleashes into six minutes of non-stop ‘135 Bars’ over a slapping instrumental that knocks – turn it up and pay attention!

Bringing the album to a close is the Deuce Maxwell & South Central Cartel featured ‘Gangsta Rap’ – and ‘Monstrous’ with Epademik and Redrum 781.

Make sure you spin this record today and drop your comments below!

You can stream the release below or access via Spotify or Apple Music.