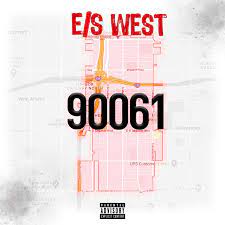 Rising new artist Eastside West assembles a crew of the West Coast’s prominent stars for the highly-anticipated new album, 90061. The nine-song project features several new street hits and a lot of politics in the lyrics, making it one of the hottest projects of the summer. Stream it now via own imprint.

90061 features guest appearances by Kokane, 2P, Crip Mac, Big Prodeje and Myka 9. It bangs out two new infectious street singles in “They Five Me” and “I’m From Lynwood,” which features 2P of Wrongkind Records. It’s the perfect origin point for any newfound fan and West Coast hip hop enthusiast. Looking for a well balance of past, present and future of West Coast hip hop, then look no further than Eastside West’s latest release.

Stream the full album below.