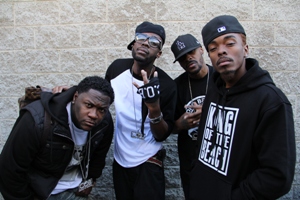 Horseshoe Gang continue their hectic last few weeks today with the release of footage from their SXSW Cypher Session.

In recent weeks they’ve dropped the single “Dumb Ass” as well as videos for Ventin and Chillin’ With My Noccas right here on Dubcnn.

Today the team at SkeeTV have dropped footage of Horseshoe Gang members Demitrius, Dice, Luciano & Kenny rocking the stage at the Lucky Lounge in Austin Texas after performing a live cypher for fans at SXSW.