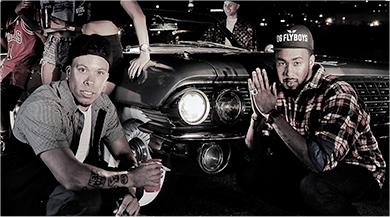 Demrick dropped his All The Wrong Things 2 project for free download on DubCNN earlier this year.

We then caught up with him for an exclusive interview, before he dropped a six-track bonus disc for All The Wrong Things 2

In that same update he confirmed he was set to release a collaboration project, produced entirely by Polyester The Saint, titled “Wings UP.”

Today we can confirm that the project will be 8 tracks deep and will be available for download here on August 13th. With features from Clyde Carson, Scoop Deville, Chuck Inglish, THURZ, Skeme, Byanka Chacon, Diz Gibran and Brevi, the release is stellar from front to back.

We can bring you the video for the project’s single “HU$TLE” featuring a guest verse from LA based emcee THURZ with co-production by Scoop Deville. The official music video is directed by Nic Delikat and takes you on a ride through the streets of downtown Los Angeles in a 62′ Cadillac. Watch below! Enjoy and if you missed his previous releases #HeadsUp, Neva LOOK Back! EP or All The Wrong Things (or bonus disc), download them today.