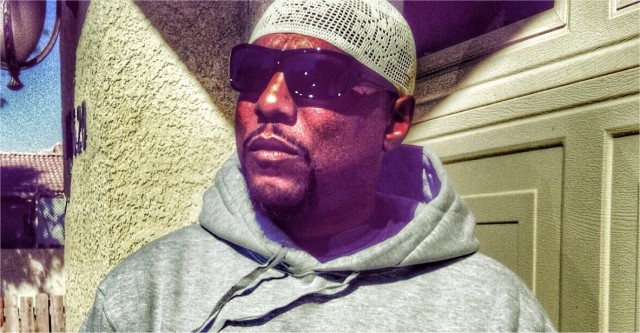 Never one to mince words, MC Ren let it be known exactly what he thinks of the state of hip-hop when he dropped off his DubCNN World-Premiered single, “Rebel Music,” last month.

Needless to say, “The Villain In Black” is back!

With a new album being diligently stacked together with super-producer E-A-Ski – a celebrated and brilliant west coast legend who has produced several notable hits for Ice Cube, E-40, Spice 1, The Luniz and others – MC Ren seems intent on keeping all of the charlatans and shenanigans out of west coast rap and hip-hop in general.

DubCNN recently caught up with the pioneering west coast OG to discuss his controversial “Rebel Music” and the soon-to-be released remix featuring another industry heavyweight. We also attempt to get a few early details on his upcoming fifth solo album “Rebel Muzik,” his reasoning for wanting E-A-Ski to handle the production for the entire project and what we can expect from the forthcoming project. DubCNN.com: Rebel Music, the album, do you have a release date in mind yet for Rebel Music the album?

No, I don’t have a release date yet; I’m just right now getting the beats, taking my time writing to them. Whenever I’m done, that’s when it’s going to come out. I ain’t even trying to rush it.

DubCNN.com: How many tracks are you planning to have with this release, will this be a full length project or an EP of sorts?

It’s going to be a full album. I want to do 14 tracks or something like that. I got a gang of ideas for the shit, too. That’s why I take my time, that’s why I got Ski on there so I can have one producer that’s tight so that shit can just have that vibe all the way through it. It’s going to be knocking.

DubCNN.com: You just recently released “Rebel Music” the single, produced by E-A Ski. What compelled you to put that record out and what were your thoughts going into recording it?

All the stuff that’s out right now and that’s been out for like the last 5, 6, 7 years is wack. All that money talk shit is wack. Everybody nowadays be trying to rush and do a million mixtapes, and they’re trying to compete like they gotta have a million songs out. So I’m just trying to make something different, dog. I’m talking about how it is and saying the shit that a lot of people are thinking like, ‘this shit is wack’. A lot of people don’t have that platform to make these records to say that, and the people that do, for some reason, they ain’t saying that shit. So, I’ll say it. When I went in and did it, it wasn’t like I went in thinking I was going to do this or do that, it just came out like it did. [Rebel Music] just came out like that.

DubCNN.com: Obviously you’ve let it be known you’re feelings on the state of music with this release, but elaborate on how you feel this era of music differs from previous eras?

It’s like this, back then you had to be original. If you was doing something that somebody else was doing, then you was biting. So everybody back then had their own styles like Slick Rick, Eric B. and Rakim, Ice-T, Whodini, whoever, they all had their own little thing about them. Nowadays it’s like everybody’s stuck and everybody is doing the same thing. Just think if everybody back then was trying to be like Slick Rick, that’s how it is now with people trying to do the same thing as the next person. There’s a few cats trying to be different and do their own thing, but the majority of people are on the same page doing all that money shit and the same ol’ I got this and I got that. But back in the day, it was like the majority of groups were different like from Public Enemy to us [N.W.A.] to Slick Rick, to Salt-N-Pepa to whomever. Everyone had their own identity and what they talk about. As a matter of fact, back then a lot of people didn’t even talk about money, you probably only had a couple of people that did that. And that was just their thing like with the jewels with Slick Rick and all of that that was his thing. But nowadays everybody is doing the same exact shit. Rebel Music is the opposite of what’s going on, and it’s some shit that everybody hasn’t had. It’s like holding your breath and then letting go after about a minute or two.

DubCNN.com: Shortly after “Rebel Music” came out, you ended the speculation of who was going to produce on the upcoming Rebel Music album by proclaiming the E-A-Ski was going to handle the production of the entire project. Why did you decide to stick with one producer, when the industry norm is to have varying sounds from a plethora of producers?

Well, the reason why people get a lot of producers, and they probably don’t even realize it, is because the record companies started that. When the record companies got heavy into it they started doing that because they wanted to get fans from this producer working with this artist. So the people at the labels be saying you need to work with this producer because he’s hot, or you need to work with this one. And their albums be sounding different, too different; the sounds ain’t right because this song and that song might not be mixed right because you got all these different producers. If you realize, back in the days when people were making classics it was only one producer doing a whole album or it would be one set of producers doing a whole album, like with the Bomb Squad, with Dr. Dre, with Herbie Love Bug or whatever. I look at it like a boxer with a trainer; you can’t have 12 different trainers for 12 rounds. It’s the same with a record. If you got the right producer, dog, where you know this nigga is tight, he take his craft seriously like E-A-Ski — he take that shit so serious and it’s hard to go get other producers to fill up a album that take that shit that serious. So, why should I have somebody serious on only a few cuts on my album that people are going to say them records are tight as hell, but then go get 2 or 3 mediocre producers and people not be feeling those; when I could just have this sound all the way through, but make it different and still have the continuity from having the same producer. That’s E-A-Ski. He is not no regular producer.

DubCNN.com: Out of curiosity, why did you pick E-A-Ski to handle production duties on this album?

Why did I pick him? Go look at his stuff on YouTube with him in the studio. You got producers out here that get two pieces of equipment with a computer and a keyboard and they think they’re a producer. Nah, this dude E-A-Ski is real producer! All anybody got to do is go look, and if they go look and see how serious he is, they’ll see he’s the truth. When this record comes out, fools going to be wanting him to come do their record, they’re going to be knocking over doors to get to him! He’s probably one of the best kept secrets in the game, and I got him for this album.

DubCNN.com: You and E-A-Ski have collaborated before on records like “The Format”, “11th Hour”, “Westside Drive-By” and others. Tell me about your relationship with Ski and how you guys build and work together.

I met Ski when I was in the bay during the Up In Smoke tour. Me and [Crazy] Toones went to a video shoot and Ski was there. That’s when I had first met him. Then one day out of the blue he just hit my phone and wanted me to get down on a song with him, and the rest is history. We just been cool ever since and we kept in touch. Before I had got him on Rebel Music it had been a minute, but when I was getting ready for this project I reached out to him. He shot me some beats, and it’s a wrap now.

DubCNN.com: So what can we expect with the Rebel Music album when it drops? And will you be collaborating with any other artists for the project?

I got a few people in mind, and I got good ideas for the album. If it comes out how I think it’s going to come out – we ain’t going to put out nothing wack, and no song on there is going to make it wack, every song is going to be real tight. I want it to be so tight, that when it comes out and starts bubbling, that when fools hit the stage and want to talk about that money shit and all that, that they’re going to get booed off the stage [laughs]. I ain’t going to put too much on it, but just wait and see.

DubCNN.com: You’ve stated via Twitter that you’re working on a remix to “Rebel Music“ that’s set to feature a “good brotha of mine” and E-A-Ski’s tweets have been telling us to “wait til we hear who’s on the remix”. Can you confirm with us, right here, who will be on the “Rebel Music” remix?

I got the Don Mega. The Don Mega is coming on the remix. Ice Cube is finishing up his parts on [the remix] so that’s coming real quick, and that’s going to be fire!

DubCNN.com: Dope! Speaking of Cube, one thing I’ve always wanted to ask you was in 1998, with “Coming After You” for the Ruthless For Life album, you and Ice Cube collaborated for the first time since Ice Cube left NWA nearly a decade earlier. How did that reconciliation or reunion take place for that collaboration?

DJ Bobcat had done the beat for that record, and he said we needed to get somebody on the record. I had brought up Cube because he was working with him at the time. So he hits up Cube and he said he was down. So I got his number and told him about the song, and he was with it. I go down to the studio one day and Bob was down there working with him on something, and Bob put up the track and we knocked it out right there.

DubCNN.com: Had you guys worked on anything else at the time, or was that the only thing you two had recorded up until “Chin Check” and “Hello”?

We did a song for him and his record, but he didn’t use it. He got that shit somewhere, but it’s old now. I don’t remember the name of it, but yeah we had done one for his record, too.

Only God knows that. I’m a leave it at that. We’ll see.