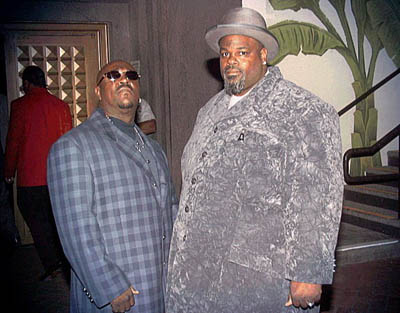 We have some sad news today, it’s been reported that Mafia IV Life President & CEO, Dell ‘Dog’ Rowels, pictured on the left – whose label in 2002-2006 made regular appearances on DubCNN – is reported as having been fatally gunned down in LA.

The only details so far are via CBS Local LA and state that a 50-year-old man was shot by an as yet unidentified person during an argument on a South Los Angeles street.

“Just before 11:30 p.m. on Wednesday, officers were sent to the area of Broadway and West Century Boulevard for reports of a shooting. Upon their arrival, officers located a man suffering from an apparent gunshot wound. He was pronounced dead at the scene. The victim’s identity is being withheld pending family notification. ‘The suspect was arguing with another man and during the argument he shot the second man with a rifle,’ said Lt. David Rosenthal. ‘The shooting took place at close quarters and the suspect fled the scene.’ It remains unclear what the two men were arguing over at the time of the shooting, Rosenthal added.”

We’ve received word in recent hours – via Scott Shephard who worked doing marketing and promotions for IV Life Records for years – that the unidentified man in this article is the Mafia IV Life President & CEO, Del Dog. Scott issuedthe following statement to DubCNN;

“Del was a great person who gave back to the community. He helped me develop as a businessman, and gave me my first job in the music industry. My prayers are with his family.”

The IV Life label in the early 2000’s was pioneering street music and mixtapes with a roster including Too Cool, Young Buc, Tray Deee (from The Eastsidaz), J-Dog, Crisstyle, Jewell (Formerly of Death Row Records) with former Comptons Most Wanted member, DJ Slip behind the boards.

We conducted the first label interview in November 2002 [read here], In June 2003 they featured in this On The Come Up article, and we also spoke to Crisstyle about his music. While his album never official dropped a single with Ice Cube – laced by Slip – did leak (listen below).

The last time we covered Mafia IV Life President & CEO, Del Dog he was working on a Documentary with Shaquille O’Neal that was to feature behind the scene details and interviews with IV Life Records, one rare DVD documentary clip of Del Dog did emerge in 2009, the first minute of “Street Apostle” – watch it below.

We did outline in 2004 a IV Life Records discography which remains incomplete but you can see some of the legacy of that here.

Our thoughts at this time go to Del Dog’s family and friends – RIP Del Dog from the DubCNN family.