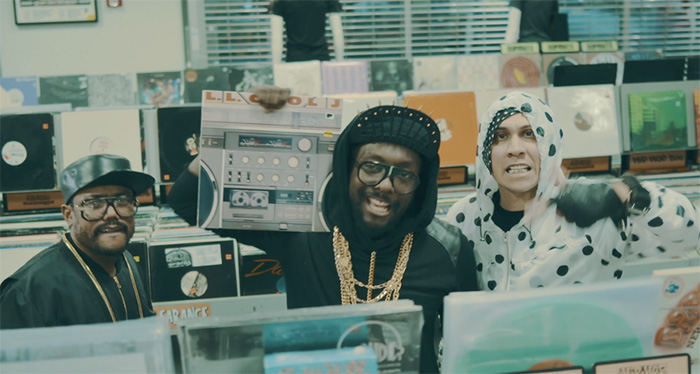 Do not sleep on this! The Black Eyed Peas are back without Fergie and with a brand new video and a return to what some would say is BEP roots.

The single and video, “Yesterday,” premiereed via Apple Music and sees the trio of will.i.am, apl.de.ap, and Taboo pay homage to their hip-hop roots and influences.

The video backdrop is a record store that shows the Black Eyed Peas giving props and imitating some of their favourite MCs while holding up vinyl covers of some of their best loved albums and singles! As you’d expect with that tone the production of “Yesterday” has an old school vibe and even samples some of the classic records they give love to.

Lookout for Onyx’s “Slam,” ODB’s “Shimmy Shimmy Ya,” N.W.A.’s “Straight Outta Compton,” Wu-Tang’s “Killa Bees,” and Beastie Boys’ “Paul Revere.” Not only that but will.i.am remensices on when BEP signed to Ruthless around the time Dr. Dre dropped “Dre Day.”

In an interview with Zane Lowe on Beats 1 will.i.am said;

“We’re paying homage to the folks that inspired Black Eyed Peas. The video is a visual version of [the song].”

The group, who is now managed by Scooter Braun (Justin Bieber, Ariana Grande), will release its first album since 2010’s The Beginning later this year. Watch the video below!