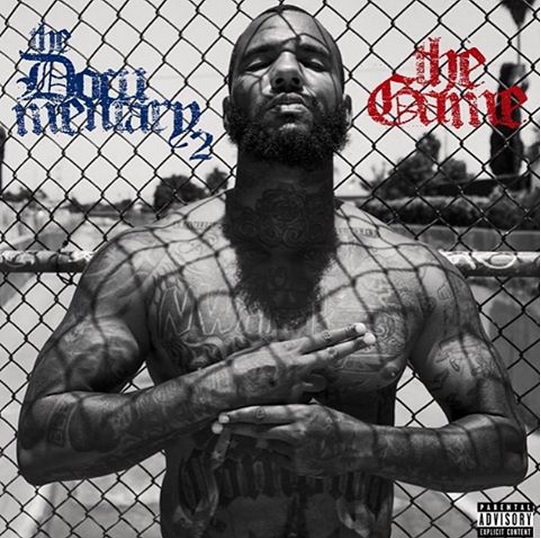 As we’re reported for months now The Game has been getting set to drop his highly anticipated album “The Documentary 2.”

Last month – after dropping the visual for the single “100” featuring Drake, Game released a photo of the album in mixing stage with OG Brian “Big Bass” Gardener & DJ Quik!

Yesterday we were able to bring you the second track off the album “Dedicated” – featuring  Mr. Dirty Sprite himself, Future, and Sonyae. In that cut Game speaks to the trials and tribulations off his undying relationship with the mother of his children.

Today we’re back as the album is now confirmed for release on October 9th with the cover and confirmation of the tracklist, that sees features from Dr. Dre, Snoop Dogg, Kanye West, Kendrick Lamar, Fergie, Busta Rhymes, Keyshia Cole, Future, Drake and production from Dr. Dre, DJ Premier, Cool & Dre, Jelly Roll, Will I Am and more.

We can also bring you 3 incredible snippets from the album for the tracks “Don’t Trip” featuring Ice Cube, Dr. Dre & will.i.am, Mula featuring Kanye West and “LA” alongside Snoop Dogg, will.i.am and Fergie!

The Game – The Documentary 2 (Snippets)

Once you’ve heard the snippets, if you haven’t already done so ensure you pre-order the album on iTunes now!

The Game – The Documentary 2 (Tracklist)

As well as that we can bring you news that Game is giving away $1000 to one lucky fan each day, until the release day of the album. Follow Game on instagram to find out more.

Now you’ve heard the snippets, if you haven’t already done so ensure you pre-order the album on iTunes now!