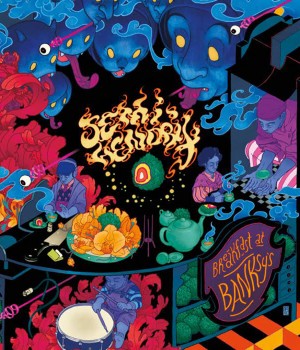 Mellow Music Group’s Semi Hendrix, a viciously verbal tandem of Ras Kass & Jack Splash drop their leading joint “M.A.S.H.” featuring Dogg Pound gangsta crip & DubCNN alum Kurupt, off their collaborative & highly creative effort Breakfast At Banksy’s. A true meeting of musically inclined minds, the duo deliver a rockin’ record that would bring a smile to any avid fan’s face of hardcore hip-hop, resurrecting passionate, raw rhyming all in the same breath. An acclaimed Grammy award winning producer, Jack Splash has worked with everyone from Compton’s King Kendrick to the Dungeon Family’s Cee-Lo Green, all while pushing his own underground funk band by the name of Plantlife, and now joining forces with Carson’s very own crafty master of ceremonies.

Recognized as a third of the rap crew Golden State Warriors (w/ Xzibit and Saafir), and known coast to coast as the waterproof MC, Ras Kass has provided his fair share of classical material with both Soul On Ice & Rassassination likely being his two most noted & prized pieces to date. Collectively the two cross conscious content with arrogant, yet artful attitude that distinguishes these dare devils from the more cartoon/comic acts flooding the mainstream these days. Reckless but reasonable, intellectual with hints of ignorance, and filled with wildly witty wordplay and wisdom, Semi Hendrix is as electric as Jimi’s guitar in ’69; which leads me to filing them amongst potent rap pairings such as Run The Jewels, Freddie Gibbs and Madlib, and the iconic two dope boyz in a Cadillac, Outkast. With lyrical assistance from Kurupt to complete the kill, the music is nearly a mirroring image of famed rebel artist Banksy’s politically charged and socially aware work that decorates cities & countries worldwide; so with that said, look and listen.