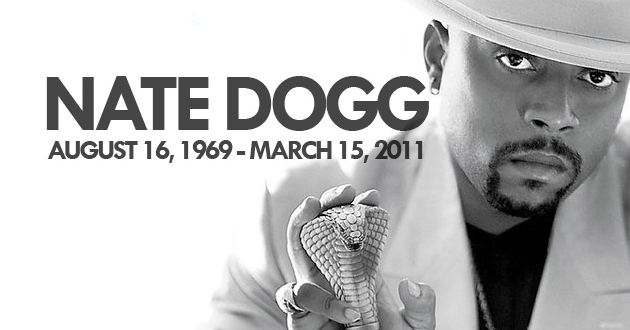 It’s hard to fathom that it’s already been 5 years since the hip-hop lost a pioneer and a legend when, Nathaniel Dwayne Hale aka Nate Dogg, died at the age of 41.

In the years prior to his death we updated readers regularly on his health after he had suffered several strokes. We reported his death and started a month of Remembrance from March 16th 2011.

In the years that have followed we’ve always posted an anniversary post and today to mark the 5 year point we wanted to bring back to the surface all those interviews as well as the incredible Nate Dogg Tribute Mix, put together by DJ Steve1der, which we posted up during his stroke recovery back in 2008. It compiles some of Nate’s greatest moments throughout his illustrious career in a 70 minute mix. We have the file available for you to listen to or download, make sure to burn this one and give it out to your friends to keep his legacy alive.

Also give the Nate Dogg Tribute mix, this time presented by KDay DJ, DJ Choice One, titled “Nobody Does It Better” a spin below.

DJ Choice One & Dubcnn Presents: “Nobody Does It Better” (Mix)

Speaking of “Nobody Does It Better” – check this footage of Nate singing a verse from the classic track below!