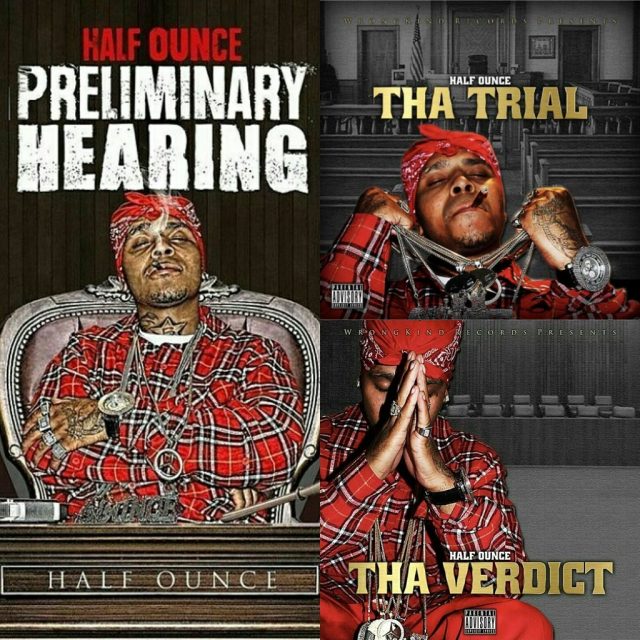 Recently, DubCNN caught up with rising Inglewood rapper, and Wrongkind Records emcee, Half Ounce, for an exclusive interview.

Half Ounce is a Wrongkind Records artist out of Inglewood ca., who has been on the hip hop scene for a while now. Getting his start with Xzibit and the Strong Arm Steady collective, Half Ounce has just released an album titled “Preliminary Hearing”. To follow that up, he has a trilogy of albums set to be released this summer; including “Tha Trial” & “Tha Verdict”. With features from Mitchy Slick, Jelly Roll, Breadwinner Kane, Jessica Rabbit, Ice Burgandy, 2eleven, and many more; the 3 disk summer release should definitively cement Half Ounce as one of the front-runners of West Coast hip-hop.

In the interview, we talk about Half Ounce’s origins in the game, his affiliation with Wrongkind Records, and much more. Follow Half Ounce on Instagram. Check the interview, and new material from Half Ounce below. Only on DubCNN.

DubCNN: DubCNN checking in with Inglewood and Wrongkind Records hip-hop artist on the rise, Half Ounce. What’s good fam?

DubCNN: Ok. For fans that don’t know, you have been on the hip-hop scene for a while; starting with Xzibit and Strong Arm Steady. How did you get your start in this game Half Ounce?

Half Ounce: Well I started off f**king with Xzibit in ’99. In 2000 I was an official member of the ‘Strong Arm Steady’ gang. That’s how it all started.

DubCNN: Dope. You are slated to release a triple-LP this year, via Wrongkind Records, titled “The Trial” “The Verdict”. Can you tell us a little about this project?

Half Ounce: Yeahdat. Well I actually already released the first album off of the triple lp project, titled “Preliminary Hearing”. I will be releasing “Tha Trial” & “Tha Verdict” this summer. Basically, this trilogy is like no other…it is authentic and real. All true stories and facts. I’ve been down my whole life; from Juvenile Hall, to placement, to camp, to cya, to County Jail, straight to the pen. So all I’m doing now is reciting my life and my experiences. “Preliminary Hearing” gave y’all a little inside look on what’s about to happen, and “Tha Trial” is going to shed more light on the whole situation. “Tha Verdict” is going to be tha icing on the cake, and really lets you know who ‘Half Ounce’ really is.

DubCNN: How did your situation with Wrongkind Records come to fruition fam?

Half Ounce: One day my bro Xzibit took me to the lab and Mitchy was there. Once we met, we clicked…and from there on out it was Wrongkind. Mitchy Slick is a real nigga, so basically two real niggas met and linked. And now we are making history. yeahdat.

DubCNN: What made you want to pursue this as a career?

Half Ounce: Well rapping, that’s what I do…since a kid it’s been about music. That’s all I know. And to keep it all the way g, rap saved my life. See, I’m a real one; so if rap didn’t become apart of me, the streets would have taken me out of the game at an early age .

DubCNN: What is your opinion on the state of West Coast hip-hop?

Half Ounce: We need to bring it back. It’s about time for a comeback because this so called new west shit is garbage, and I’m just keeping it 100. I don’t think it’s wack, it’s tight, but there is no Real west coast music, so basically sh*t is watered down. But that’s OK; Half Ounce is about to bring this sh*t back…yeahdat.

DubCNN: What was it like for you growing up in the gang-infested area of Inglewood, Ca?

Half Ounce: It was tough, but if I could rewind and change time, I wouldn’t change a thing…because my gang infested hood and my life experiences made me who I am, a better an stronger person.

DubCNN: What are some of the projects that are available now fam? And where can fans get them?

DubCNN: What else does Half Ounce have on deck for 2017?

Half Ounce: Stay on the look out for a new movie I just did called “Baby Gangsta”, coming soon to theaters near you. The movie will feature me as ‘Baby Papah’, Compton Menace, Slink Johnson (Black Jesus), and Mitchy Slick. I’m also working on another film with Omar Gooding Jr., called “Ninos Revenge”, coming this summer, so stay tuned and lace ya chucks up! It’s bouta get real this summer…yeahdat.

Half Ounce: Y’all can check me out on Instagram @halfounce500 and my twitter @half_ounce. You can go get that “Preliminary Hearing” on iTunes now.

DubCNN: Thanks Half Ounce; from DubCNN. Any last words? The floor is yours.