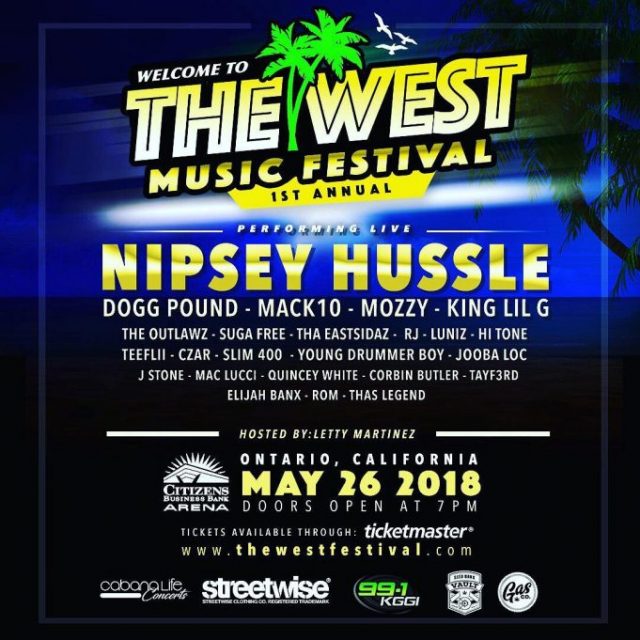 It’s now around 6:00 pm. The stage was set. The lights were bright. Clouds of Sour Diesel and O.G. Kush is permeating throughout the Citizens Business Bank Arena, in Ontario, CA Accompanied by the clouds inside the venue and outside on this gloomy grey day in the Inland Empire were rainfalls of dollar bills courtesy of Nipsey Hussle and his Marathon family while sounds from Victory Lap boom out of every speaker in the building.  It was a fitting and climactic end to a day full of West Coast up and comers and undisputed Music Legends.

The 1st Annual Welcome To The West Music Festival kicked off with spirited performances from new mostly regional acts (you know the type of performers who end up becoming a T. I.  or Kendrick Lamar, so pay close attention to show openers during future concerts).
The evening really got going after a Slim400 and All Money In affiliate J Stone rang off a few of their SoCal bangers to a now growing crowd of fans consisting of music fans from San Diego, Sacramento Los Angeles, Inland Empire and neighboring states, but some of the loudest applause of the show came when Pomona natives Young Drummer Boy and YungBlu hit the stage. The former performed his “No Fly Zone” hit while the crowd joined in with F… 69 chants. Young Drummer Boy presented one of the best sets of the whole event with his instant classics “Can’t Tell Me Nothing” and “Gangster Nation”.

Another outstanding performance was brought by Sucio Representative and South Los Angeles very own King Lil G. He had control over the thousands in attendance from the start of his set, rapping and smoking a very long joint all the while a huge projection of the  Sucio delighted the concert goers of a largely Hispanic and Mexican descent. On top of the quick breaks between songs when KLG would lead the crowd in Sucio chants he also showed a somewhat humanitarian glimpse as he repeatedly spoke on the need for Black and Brown communities to unify,  a feeling echoed by many of the nights’ performers host and DJs.

The second best performance of the Fest came from Mr.LA aka RJ.  His energy put the those in attendance in a trance (the abundance of newly legal marijuana might have also had something to do with it). Songs like Flex and Get Rich were easily recited word for word by nearly every person there leaving Mr.LA time to flex and dance across the stage on all his haters and even left him with enough energy to literally dive in the crowd with security bewildered and close behind. If that wasn’t exciting enough RJ had more in store performing and dashing through the audience from the front row to the back of the arena floor giving fans the type of performance you tell your friends in years to come. If the show had ended with RJ, fans would have left completely satisfied, but thanks to the good people at #westfest the night was only getting started with legendary hash clouded sets from The Outlaws, Mack 10, The Eastsidaz, The Dogg Pound, The Luniz and The King of Pomona Suga Free. Free showed the younger performers that he still had stage presence and surprising stamina running across the stage and back area for nearly his entire act, killing with classic west coast hits “Why You Bullsh! ttin”,  “I’d Rather Give You My “ and many others. The legends represented for their generation in most prolific way possible, but there was no doubt the future belonged to the “Bladdadah” rapper Mozzy, with a hyped bassed out jam session with all the raw energy in the building being channeled through the Sacramento rapper and his “HellGang” affiliates. Mozzy Flawlessly ripped the stage, even Compton native and YG affiliate Slim400 ran to the stage and congratulated the “Do it For the Dooters” rapper mid-set. Mozzy finished his set with”Sleepwalking” his No.1 single that also made its way onto the silver screen in Black Panther earlier this year. Now we come full circle, to the reason why we all came out tonight. Crenshaw’s own Nipsey Hussle is truly A Man Apart, where other acts might waste a few seconds here or there, Nipsey utilized every moment of his performance and engaged the audience with hit songs “Rap Nigg^$” and “Victory Lap” while a huge neon Victory Loop played on screen. The TMI captain must have felt generous flailing thousands of dollars on the welcoming crowd below.  Neighborhood Nip performed at the #Westfest before continuing on his “Victory Lap Tour” with scheduled stops in San Diego (May 27) and onto New York City (June 4) where he’ll be playing at Irving Plaza, a venue you might recall from a few years back.  It the place where Brooklyn rapper Troy Ave. got shot and popular podcaster Taxstone was accused in the murder of Troy’s good friend and bodyguard Ronald  “Banga” Mcphatter.
Article by Chistian Jamal .