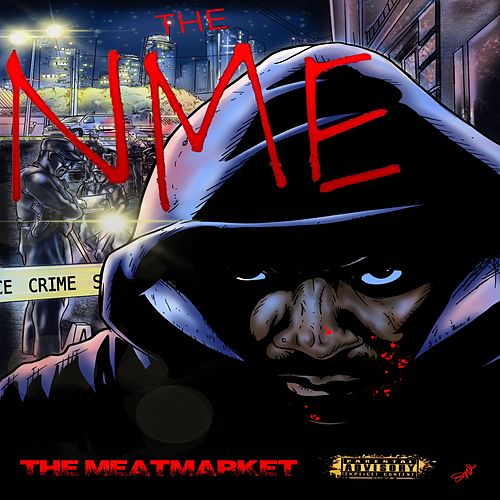 The NME has quite the extensive history in this music game, with his introduction coming on DJ Battlecat‘s first album, “Gumbo Roots,” on the song “Set Trip.” He was later featured on the Hollywood movie release, “TalesFromTheHood Soundtrack,” which subsequently went gold in two weeks, with The NME receiving his first gold plaque.

He was later featured on the hit video game, “True Crime: Streets of L.A.” alongside “Caviaar” & “Maino.”
The NME also comes from possibly the most extensive music family tree in the hip-hop game with Kurupt, Roscoe and Redrum 781 being his cousins, Mortisha being his sister, and Beazt Gatlin being his brother, whose son is Da’Great.

The NME has worked with numerous hip-hop luminaries including the South Central Cartel, Kurupt and Big Tray Deee, who featured The NME on the Slip Capone collaboration, “CRIP2NITE.”

Listen to The NME’s new “The MeatMarket” album here. Check the official album review below.

From the project’s outset, an ominous Twilight Zone themed intro, the tone is set for something nothing short of spectacular. The lyrical NME wastes no time, spitting balls of flame on the song “1989,” detailing his inception into the rap game with Slip Capone (R.I.P.), Mortisha, Keke Loco, Kurupt and more, while also illustrating the evolution of gang culture in South Central Los Angeles, stating “Me and Kurupt standing on the tables rapping, this nigga would freestyle from the letters off of niggas jackets,” and “300 deep fighting niggas from Trouble, before they was 51’s they was Nuthin but Trouble.”

On the track “Clicc Clacc,” The NME, his sister Mortisha and Da’Great lyrically assasinate the hypnotic production with Mortisha delivering lines like “The nation’s audacity, all I see is apathy, niggas be like I got next, yeah bitch after me.” And, “My bars are like jail, they’ll make you think about mistakes.” The NME bodies competition with bars like “Aywhere grimey you can find me, I’m probably in the lobby getting sloppy-toppy like Bill Cosby,” and “My brain’s a monorail, deadly train of thought, break your tracks in half like the Hulk when I walk.” Hardcore hip-hop at its finest.

On the highly addictive track, “Roll’N,” NME reps his set to the fullest while displaying his highly-underrated songwriting ability. This track is sure to be pumping out of speakers throughout the summer and beyond.

The album loses no steam with tracks like “The Undefeated” and “WessyderRyders,” featuring AllCity & Dogman Compton.

The NME recruits his day one’s on the self-explanatory “Ground Zero,” featuring Kurupt, Mortisha, Roscoe, Lil Leak and the one-and-only Redrum781, who spits “Shaolin stance, mentally hitting them barbells, Heaven sent but I’m raising all Hell.” NME chimes in with additional fire, “NME turn yo gang to a human centipede, I can shoot at the floor make the damn ceiling bleed.” While The Kingpin Kurupt snaps, “Prolific lyrical misfit that lifted bodies across the Mid-Atlantic and Pacific.” Each emcee delivers grade A material on this future classic track. CERTIFIED BARS!

The NME connects with West Coast heavy-hitter Bullet Loco, aka Jayo Felony, for the song “Zoom Zoom Zoom.” The song is a definite party starter and should soon be riding airwaves nationwide.

The late-great Long Beach, California hip-hop artist, Bad Azz delivers one of his last collaborations before his untimely passing on the 420-friendly song “HotBox’N.” Classic hip-hop!

On “Laugh’N@DeezClowns,” featuring Moe ZMD, NME holds no punches while addressing the state of the music industry and social media fraudulence. Not for the faint of heart!

The NME enlists the SCC‘s own Young Prodeje aka Cali Pitts for the laid-back G-funk inspired song, “I Know Ya’Gurl.” Cali Pitts shines bright on this track, delivering a raw, potent verse, topping it off with the line, “I know yo bitch way better than you!” A player’s anthem.

“Magic Bitches” and “The Bull & Tha Butcher” close the project out nicely, with both tracks featuring rising hip-hop artist, Da’Great, who goes bar-for-bar with the lyrically inclined NME.

In summary, “The Meat Market” is a must-have for any West Coast hip-hop connoisseur and hip-hop fan in general. Stream the album above and stay tuned for updates on The NME!