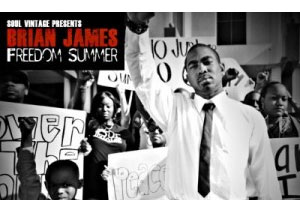 We quickly followed that up with news that Brian James would return with a brand new album entitled “Freedom Summer” – a record inspired by the 1964 campaign of the same name that attempted to increase voter registration within the African American community in a time when African Americans were excluded – for release in August. Get Up was the first leak from the LP and today we are proud to be able to bring you the full 12 track release for STREAM free as well as for download via BandCamp.

“Freedom Summer” can be downloaded now for only $5 via BandCamp, listen free and then support it before hitting Brian James on Twitter before once again checking out last years Life On Mute project.