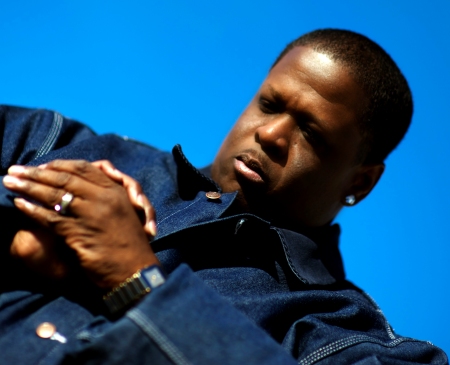 Since 1990 West Coast legend CPO Boss Hogg has been captivating fans of west coast hip-hop once he stepped on the scene with his crew, the Capital Punishment Organization.

Discovered and introduced by MC Ren, CPO Boss Hogg, aka Lil’ Nation, made his extraordinary debut when the video to “Ballad Of A Menace” was released, and featured all the members of N.W.A. — Eazy-E, Dr. Dre, and MC Ren.

On the heels of C.P.O.’s To Hell And Black debut album, Boss Hogg landed a guest appearance as “Mr. Big Draws” on N.W.A.’s “Findum, Fuck’em, and Flee” off the Efil4zaggin album.

From there, CPO Boss Hogg would continue to make appearances on a host of classic west coast albums in the 90’s including the Above The Rim (“Just So Ya No”) and Murder Was The Case (“The Eulogy”) soundtracks, as well popping up to steal the show on 2Pac’s 9-times platinum I (“Picture Me Rollin”). In the early 2000’s Boss Hogg continued to link up with some of the west’s finest when he showed up alongside Tha Eastsidaz, Xzibit and Kurupt for “The Big Bang Theory”, he popped in for 2 cuts for Warren G’s Return Of The Regulator (“They Lovin’ Me Now”, “It Ain’t Nothing Wrong With You”), and put one down for Snoop Dogg’s Bones soundtrack with “This Is My Life”.

Having remained a topic of conversation over the years, many fans wondered what became of him; until news surfaced in 2010 that CPO Boss Hogg had suffered an apparent heart attack. After 3 years of little to no news of the tragic event, CPO Boss Hogg fell into relative obscurity, until now.

Dubcnn recently caught up with the seldom seen CPO Boss Hogg for an exclusive, in-depth interview. In part 1 of our conversation with the Boss Hogg, we discuss what happened during that scare in 2010 and what he’s been doing since, get the details on his upcoming album “I Boss”, talk about his early career and being discovered by MC Ren, and more! Dubcnn.com: First off, Boss, how are you feeling? You gave us a scare there in 2010 from an apparent heart attack.

I’m feeling great, man! It wasn’t a heart attack, it was partially congestive heart failure, but the doctors didn’t know what happened. There was a host of things going, my body was, what they called weeping; a whole lot of carbon dioxide had built up in my brain and they didn’t know what that was about, but mostly it was congestive heart failure. A lot of people tend to mix up CHF with a heart attack, but they’re not the same thing. It was going to kill me just the same though! I didn’t realize it, but the doctor told me I was literally on my deathbed.

Dubcnn.com: Well, we’re glad to hear that you’re ok! What have you been doing over the last 3 years since that incident?

That event gave me a lot of pause because I actually had dreams that I had died while I was at the hospital, and I didn’t really realize that I hadn’t died. One of the things that went through my head while I was dreaming these things is that I needed to do another album. A lot of people had been trying to get me to do one for years now. So my main focus has been trying to get something out, and mid last year we decided to go ahead and get something cracking.

When I was in the hospital they had a lot of tubes down my throat and nose, so when I came out of that my voice had changed and I wasn’t used to using it. It took me a minute to get my voice again on the mic, but we just finished up the album.

Dubcnn.com: Can you tell us about the new album, who you’re working with?

I just worked with the people around me, my camp, so my brother Bokie Loc produced a lot of the tracks, Tha Chill from CMW produced some, E-A Ski did one, and I co-produced one called “Planet P.O.D.”. Mostly it was my brother and Chill who produced the album. I didn’t really want to venture out because I hadn’t been doing anything for a while anyway, and I didn’t really have the same rapport with everyone. Not that I had a beef with anyone or anything like that, but I just had everything I needed right here.

Dubcnn.com: Do you have any guest features on there?

The features on there are Bokie Loc, Tha Chill, my boy Grubby from a group here in Compton, but it’s a lot of me. I didn’t want a whole lot of people on my album because I’m seeing too much of that lately. Who’s on my album? I’m on my album! [laughs] That’s what I want people to hear. People always told me they were ‘tired of seeing me do so many features, we don’t have enough songs with just you’. So that’s what I’m giving them this time, more me.

Dubcnn.com: When spoke beforehand, you mentioned the name of your upcoming album would be I Boss. How did you come up with that particular title?

I was sitting in my office, my backyard, with my office supplies which are a little bit of something to drink and smoke, you know doing what we do. I pictured myself being at a dinner party and somebody asking me, “So what do you do?” Just off the cuff I said, “I Boss”. I boss people around, that’s what I do, and that’s stuck in my head, so I decided to call the album that. The duality of it is that this what I do, but it’s also who I am. When I first came out with the name Boss Hogg, the only other person who had that was homeboy from the Dukes of Hazzard. Now, there are about a thousand of them, which is why I never dropped the CPO because it helped to differentiate it from everybody else.

Dubcnn.com: What’s the creative direction for the album?

I don’t have a certain direction. I’ll put it to you like this: when I used to write songs, and actually have a direction that I wanted to go, I would write without any music or anything like that. Dr. Dre asked me once, “How do you write songs without music?” I told him, “I don’t know, I just do it.” Dre said, “that seems backwards, you should write songs to music.” I told him I’d try it, so that’s what I’ve been doing. I don’t have a direction, I hear a track and let it tell me what to write, but it’s vintage west coast gangsta shit, it’s story-telling songs, it’s pimp/player; but it’s done my way.

Dubcnn.com: Is this an independent release, or are you signed to certain label?

It’s being released independently on Tilted Brimm Entertainment. I had opportunities to sign with different labels, but after you deal with Capitol Records, Death Row Records and that kind of thing, and now with the internet really allowing us to have creative control; which I’ve never had creative control, so I can use whatever track I want, go in whatever direction I want to go, and do whatever I want to do. My buddy, Anthony Downing, and I got together to do this.

Dubcnn.com: Ok, cool. Let’s switch gears a little bit and talk about your early career. Early in your career you were part of the C.P.O. group that was ushered in by MC Ren. How did that original collective come together?

Really, it was a buddy of mine Ricky Acevedo and I who were thinking about getting into rap. The reason we were thinking about it was because I lived right around the corner from Ren, who I’ve been knowing Ren forever, and Dre lived right around the corner. So with N.W.A. being right here in the neighborhood, we wanted to do something, but neither one of us knew how to rap [laughs]. So I’m listening to everyone I can like Chuck D, KRS-One, D.O.C., but mostly N.W.A. We had a group called Da F.O.E., which stood for Forces Of the Empire, which really sucked [laughs]. But anyways, that was the name of the group, and we came across these guys that called themselves Capital Punishment, which we liked. It was real pro-black, almost Afrika Bambaataa-ish, you know? Everybody was down with the whole Capital Punishment thing, but we were different cliques, so Ricky had the idea of us all getting together and calling ourselves the Capital Punishment Organization.

We all agreed, and the next thing I know my brother tells MC Ren that I was rapping and he came around to hear it. He asked me what I was calling myself, and I told him Lil’ Nation. To me, Lil’ Nation meant I was big enough to be a nation, so that’s how I became known as Lil’ Nation. He thought it was cool, but back then, there were all these things like ATL for Above The Law, PE for Public Enemy, BDP for Boogie Down Productions, and he felt I needed something like that. I told him that the only other thing I had was CPO. He asked me what that was and I told him it was the Capital Punishment Organization. It was supposed to be a group, but I was the first person who came out of the group, and nobody else ever came out. So everybody stuck me with the name CPO, even though my name was never CPO, it was always Lil’ Nation. It’s almost like nobody remembers that, but that’s where CPO came from.

Dubcnn.com: When you did “To Hell and Black”, what do you remember about the making of that album? I mean, you were working with MC Ren of NWA that had to be incredible at that time.

For me, I was super nervous! [laughs] Like I said, I grew up with Ren, but getting into rap was an entirely different thing to me. That was his area of expertise, and I was brand-new to it. When I signed to Ren, I had been rapping a total of two weeks, that’s it. Growing up, it was always my brother, Ren, and this cat named Chip who was always rapping together. I would always tell them to get a real job, but it turned out the shit they were doing was making the most money [laughs]. But Ren had heard a song I did called “Something Like Dis”, which I did to D.O.C.’s “Funky Enough” song. He listened to maybe 10-15 seconds of it, immediately took me to Young D’s house and him to do a different beat for it. Ren told me to rap my song to that beat, but I thought the track was too fast, but he just told me to try it. I did, and that’s actually the recording you hear on that CPO album.

After that, Ren said he was going to sign me to his label, and I’m thinking, ‘what? I don’t even know how to rap’. That was my very first rap that I had recorded, he just told me I needed to write nine more [laughs]. He handed me a track from Isaac Hayes, which ended up being the “Ballad Of A Menace” track. I wasn’t sure I could write anything to it, but I smoked something right quick and sat down with a pen. The first thing out of my mouth was, “this is a ballad of a menace”……