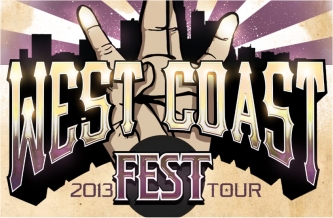 Following on from the success of the first ever West Coast Fest concert at Club Nokia on March 21, 2013, the organisers are taking it on tour!

After overwhelming demand the event producers, Behind The Scenes (BTS) have announced Part II of the West Coast Fest 2013 with a set of five initial tour dates.

The West Coast Fest 2013 tour will head out from its Los Angeles backyard to music fans across the nation. Hip-Hop Icons E-40, DJ Quik, Mack 10, Dogg Pound, Bone Thugs N Harmony, Warren G, Suga Free and Baby Bash will unite on stage, making history with the first multi-city tour of its kind. The dates are shown below and in the event flyer!

“After the huge success of Krush Groove at Gibson Amphitheatre and the first West Coast Fest, all of the artists are excited to take the music outside of LA and perform at bigger venues in other cities.”

With Wish Bone of BTNH adding;

“It’s a pleasure to go on the road with all the West Cost legends and being under the same umbrella as dudes we listened to then and now not to mention walk the same stage is nothing but incredible.”

The tour’s star-studded lineup will perform hit after hit, bridging the gap between Northern and Southern California major West Coast superstars, and serve up amazing shows for thousands of fans that have never witnessed them up close and personal.

The CEO of BTS is Mack 10 who expained;

“This line up is Amazing! If you love West Coast music then you have to see this show. It is a real honor for me to be able to do concerts of this magnitude.”