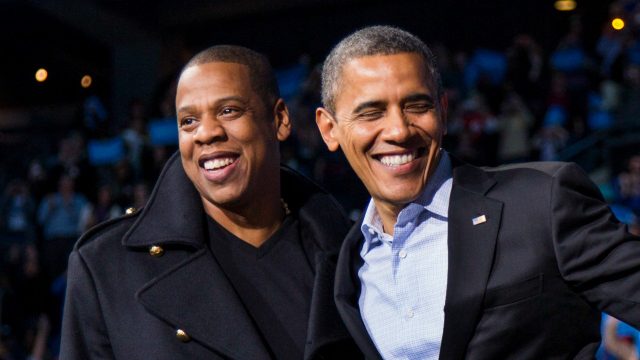 Today, iconic hip-hop superstar, Jay-Z, was inducted into the ‘Songwriters Hall of Fame’. This well-deserved honor was announced, via dropbox link on Twitter, by former president of the United States, Barack Obama.

With rumors swirling about Jay possibly expecting twins soon, Barack Obama took time to pay homage to his good friend, whom he described as ‘The Greatest Rapper of All-Time’.

“I’m pretty sure I’m still the only president to listen to Jay Z’s music in the Oval Office,” said Barack Obama. “That may change at some point, but I’m pretty sure that’s true now.”

Jay-Z took to Twitter, which is a rarity, to give thanks to all of the artists that have inspired him, including numerous West Coast hip-hop stars, including Kendrick Lamar, Snoop Dogg, Nipsey Hussle, MC Eiht, Kurupt, Xzibit, E-40, Too Short, Mac Dre, Ice-T, & Ice Cube.

Congratulations Jay-Z! Only on DubCNN.