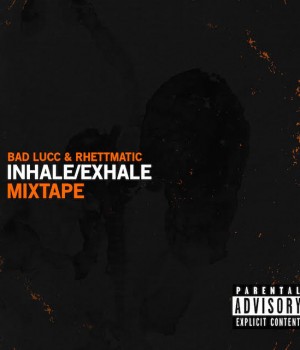 Active since his Dubb Union days and still at it, Bad Lucc has been spittin’ his way to the forefront of rap, with numerous collaborations with west coast greats, to establishing his own independent stable alongside Problem known as Diamond Lane, and now widening his range for fans & listeners possibly doubting his presence and prowess on the mic in recent times. Releasing this as a precursor to his Diamond Lane/Jamla Records (9th Wonder) endorsed EP Breathe, Bad Lucc’s Inhale/Exhale mixtape hosted by DJ Rhettmatic features a collection of the game’s finest & refined rhymers, with appearances from Rapsody, Talib Kweli, KXNG CROOKED aka Crooked I, TDE’s top dog Jay Rock and label mate Problem, serving as a gift to all his fans that have remained supportive of his musical career. Highlighting his passion for hip-hop with this particular joint, Lucc shows that it’s been his true commitment and dedication to the craft that has been the backbone to all his previous and still on going success today, emphasizing his versatility as an MC, and reminding all his competition and critics of style and gutter grace.