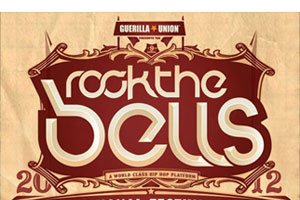 The Rock The Bells 2012 Festival Series is less than a month away now and Guerilla Union, the live events company behind world-class platforms such as Cypress Hill SmokeOut Festival and Paid Dues Independent Hip Hop Festival, are gearing up to make this the best ever!

We’ve been keeping you up to date via the Dubcnn & Rock The Bells 2012 Event Page and today Boost Mobile in association with Guerilla Union have announced the final artist additions to the lineup.

The Holmdel, New Jersey stop has added Slaughterhouse, French Montana + Red Caf�, Chief Keef and Tinie Tempah and lastly, after hearing all of the fans’ requests, DMX and EVE have been addedto Mountain View, CA, rounding out their appearance at all three Rock The Bells Festival Dates

Accompanying the news of artist additions, another stage has also been added exclusively to the San Bernardino festival titled the Guerilla Union Stage mixed by DatPiff. Referring to San Bernardino�s NOS Events Center, Chang Weisberg of Guerilla Union states, “The Fairgrounds in San Bernardino allows us the room to build an additional stage, versus the amphitheaters in Mountain View and Holmdel where it is not as spaciously possible. Plus, Southern California is our home-court. It�s where Rock the Bells all started. We wanted to do something special for the fans that have supported us from the beginning. The Guerilla Union Stage is our way of saying thank you to our backyard fans that helped catapult Rock the Bells to what it is today, giving us the ability to bring the music and the experience to additional cities, nationally and internationally.

This year – released on Tuesday 24th July – there will also be the first-ever official Rock The Bells Mixtape, hosted by DJ Muggs of Cypress Hill and freestyle world-record breaker Supernatural. The mixtape will feature exclusive tracks from participating festival artists, including the first Deltron 3030 single in over 10 years, as well as the first single from RZA�s directorial debut: The Man with the Iron Fists (presented by Quentin Tarantino). Stay locked to Dubcnn for that and ensure you check out the official Dubcnn Rock The Bells 2012 Event Page.

Dubcnn are once again proud to be involved in this most prestigious festival series as a media sponsor and will be giving fans and readers the chance to win tickets – stay tuned this week for that!